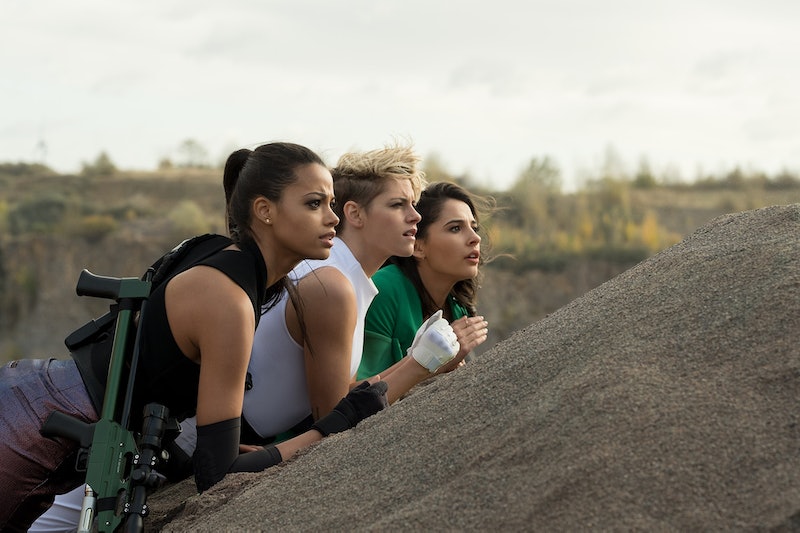 Charlie's Angels, the iconic female crime-fighting agents, are back in the first trailer for the new reboot, and they're ready to start kicking ass and taking names. The new Charlie's Angels trailer introduces a new trio of badass women, while also teasing the plot, and their mission to save the world.

While not a direct sequel to the most recent Charlie's Angels films, this new adaptation about the private detective agency is still a continuation of the previous franchise, from the original 1976 television series to the 2000s movies of the same name. Only instead of starring a Cameron Diaz, Drew Barrymore, and Lucy Liu as the trio of Angels, the metaphorical baton has been passed to Kristen Stewart, Naomi Scott, and Ella Balinska.

Stewart plays Sabina Wilson, the party animal who's also got a lot of skill but is a bit of a "wild card," according to Entertainment Weekly's coverage. Balinska's Jane is a former MI6 agent and the "muscle of the group." Lastly Scott plays Elena, an MIT-trained scientist who actually isn't an Angel, but enlists their help when she finds out that the company she works for is going to use technology she helped create for nefarious purposes. Elena is “the heart of the movie,” Elizabeth Banks told EW. Banks is directing, writing, and producing this film. Oh, and she's also starring as Bosley, the Angels' handler.

Another familiar face in the trailer is Noah Centineo who's playing Langston, a guy-in-the-chair type, by the looks of it, working in a lab with Elena. He also seems to be a "handsome nerd" Jane's flirty with. But romance is not a main focus or goal of this film, according to Banks. “It was important to me to make a movie about women working together and supporting each other, and not make a movie about their romantic entanglements or their mother they don’t call enough,” she told EW. “When I’m at work, I don’t talk about those things. I get on with my job. It felt important to do that for the Angels, to treat them with the respect their skill set demands.”

A lot like in the original film, these women are able to use the underestimation of small-minded men to gain access and become close to their targets, and saving the day. Officially called the Townsend Agency after Charlie Townsend, the agency that employs the Angels is also highly impressive. As seen in the trailer, just these three Angels alone have access to multiple closets full of wardrobe, weapons, and gadgets, which is because Charlie has only gotten more and more rich. "Charles Townsend is richer than ever, so he’s grown the business into a global spy agency," Banks told EW.

Also, the movie is getting a brand new song by three music industry Angels. Ariana Grande, Lana Del Rey, and Miley Cyrus are collaborating for the song heard in the second half of the trailer. Plus Grande wrote in an Instagram post that she's co-executive producing the soundtrack with Ilya Salmanzadeh and Savan Kotecha, also a big deal, so look forward to some great female-driven pop accompanying the girl power movie.

The movie comes out in November, so get ready for this new chapter in the Charlie's Angels franchise, because it seems like Stewart, Scott, and Balinska are really going to knock this one out of the park.