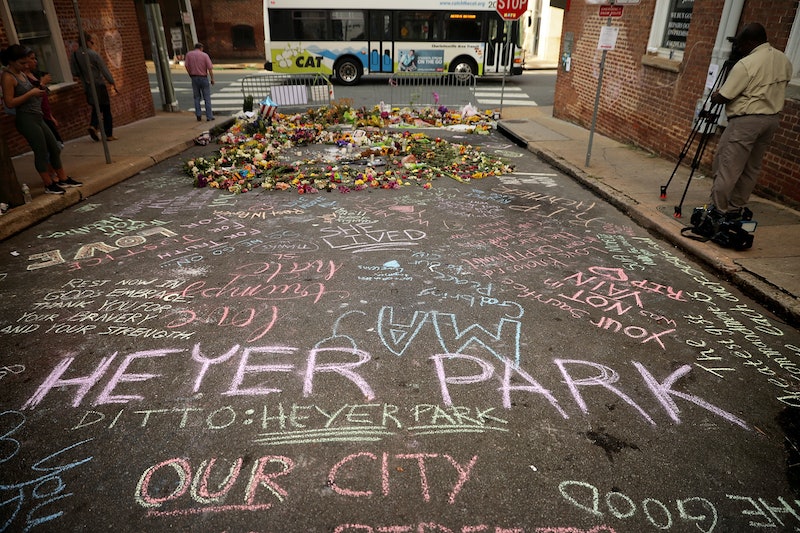 Months after being convicted of first-degree murder, the Charlottesville driver who killed Heather Heyer at the 2017 Unite the Right rally pleaded guilty to hate crimes in federal court on Wednesday morning, the Justice Department announced. Self-described neo-Nazi James Alex Fields Jr., who plowed his car into a group of counter-protesters at the Charlottesville rally, pleaded guilty to 29 counts of violating the Matthew Shepard and James Byrd Jr. Hate Crimes Prevention Act, according to the Justice Department.

Each of Wednesday's guilty pleas carries a maximum penalty of life in prison and a $250,000 fine. However, the Ohio man will already spend the rest of his life in prison by virtue of his murder conviction in December, The Washington Post reports.

"In the aftermath of the mass murder in New Zealand earlier this month, we are reminded that a diverse and pluralistic community such as ours can have zero tolerance for violence on the basis off race, religion, or association with people of other races and religions," Attorney General William Barr said in a statement announcing the guilty pleas. "Prosecuting hate crimes is a priority for me as Attorney General. The defendant in this case has pled guilty to 29 hate crimes which he committed by driving his car into a crowd of protesters. These hate crimes are also acts of domestic terrorism."

Although ostensibly a protest against the removal of Confederate monuments, the 2017 Unite the Right rally in Charlottesville devolved into a rally supporting white supremacy, with participants displaying swastikas and chanting, "Jews will not replace us!" Heyer's murder was not the only instance of white nationalist violence at the rally; a group of white protesters viciously beat a black man named DeAndre Harris during the rally as well. One of the men responsible for assaulting Harris pleaded guilty in January and will spend four years in prison as a result, CNN reported.

Heyer was counter-protesting the white supremacist rally with a group of activists from the Democratic Socialists of America, ABC News reported at the time, when the neo-Nazi rammed his car into the group, killing Heyer and injuring dozens others. During his trial, the man's defense team argued that he sped up his car out of fear and didn't intend to hurt anybody. But the prosecution pointed out that three months before the rally, he'd posted a meme on Instagram that showed a car plowing through a group of people labeled "protesters."

The Charlottesville protest and its aftermath drew significant attention, with some viewing it as the embodiment of the recent resurgence of white nationalist violence in America and abroad. Right-wing extremists were linked to at least 50 murders in 2018, according to CBS News, a 35 percent increase from the year before, while far-right attacks in Europe jumped 43 percent in 2016. A study by the University of Maryland found that right-wing violence has been steadily rising since 2000, while attacks by left-wing extremists have been falling precipitously over that same time.

President Trump drew near-universal condemnation after the Charlottesville rally when he told reporters that there were "very fine people on both sides" of the protest. In December, Heyer's mother Susan Bro told CNN that she didn't return the White House's calls after she heard Trump say that.

After Heyer's death, the Heather Heyer Foundation was established to provide scholarships for young people wishing to pursue careers in social activism.