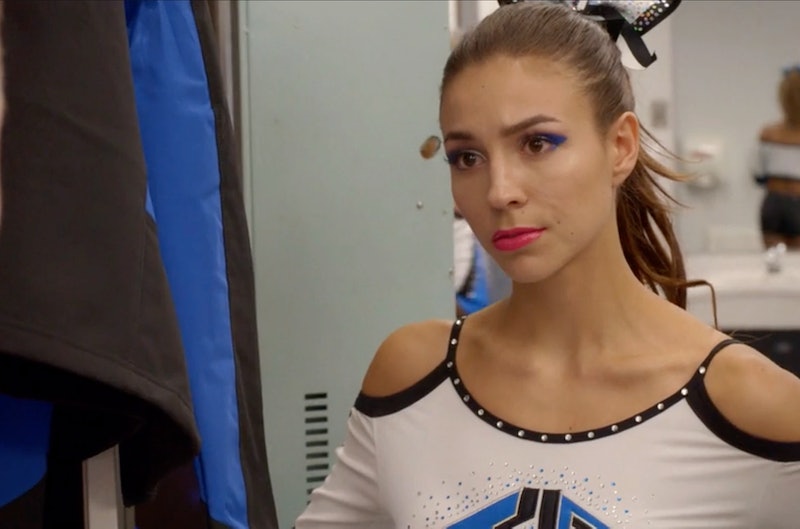 Lifetime's new movie, The Cheerleader Escort, centers around a group of college cheerleaders who moonlight as escorts with rich alumni. It's the kind of scandalous premise that could only be made juicier if Cheerleader Escort were based on a true story, but it's not — at least if it is, the network hasn't explicitly said so. However, there was a similar story that made headlines a few years ago.

According to a report obtained by the Myrtle Beach Sun News, an anonymous letter was sent to Coastal Carolina University officials in 2017 alleging that members of the school's cheerleading team had been working as strippers and escorts. The entire team was suspended during the subsequent investigation, though members were still permitted to go to class.

A lawyer representing five of the team's members denied the accusations at the time, telling the Sun News, "I am shocked and saddened to see these girls become victims of these baseless claims from an anonymous source. Even more disheartening is that these girls were not permitted due process in their own defense to show just how outlandish and ridiculous these allegations truly are."

According to Inside Higher Ed, the probe ended a month later, in May 2017. Interviews with the team reportedly revealed that some cheerleaders had set up an escort service through Seeking Arrangement, which facilitates relationships between "sugar daddies and mommies" and "sugar babies," who typically receive money and gifts in exchange for their company. Ultimately, the school decided not to take further action.

"The university has thoroughly investigated this matter, taking into consideration the mission of the institution and our No. 1 priority and obligation to protect the safety and well-being of our students," Coastal Carolina President David A. DeCenzo told Inside Higher Ed in an emailed statement. "As a public institution with a code of ethical conduct and as a public agency entrusted with public funds, we have a duty to investigate serious allegations. We had no choice."

University spokesman William Plate told the outlet that no further information or interviews would be given about the investigation.

As for The Cheerleader Escort, it follows a roughly similar story. The movie stars Alexandra Beaton as Cassie, a college freshman who's overjoyed to land a spot on the cheerleader team only to find not everything is as it seems. After she starts falling for the President of the Alumni Association despite their age difference (and he begins paying part of her tuition), she learns that other members of the team have been working as escorts. But that's where any commonalities end. In addition to the fact that the Coastal Carolina scandal did not involve any alumni, Cheerleader Escort also includes dramatic plot lines like pregnancy, murder, and Cassie vowing to expose everything from the inside. So even if the Coastal Carolina incident served as some spark of inspiration, Cheerleader Escort is definitely not based on it.

See how things work out for Cassie when The Cheerleader Escort premieres Sept. 14 on Lifetime.