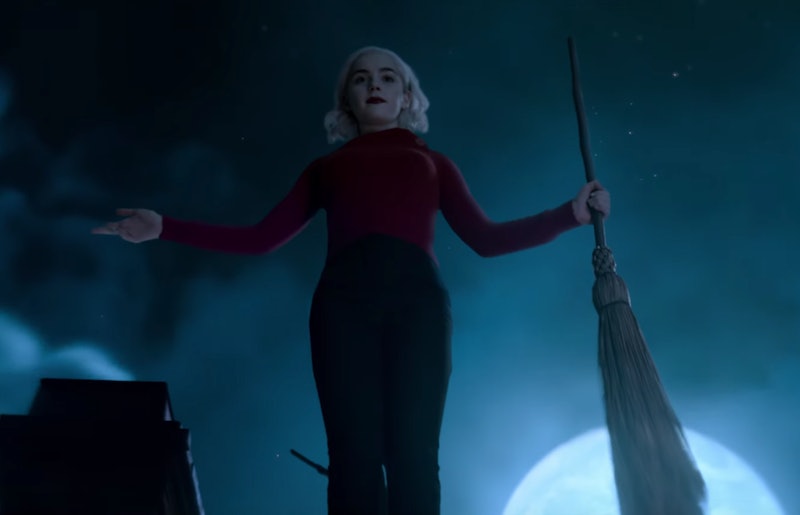 Praise Satan, there's an all new Chilling Adventures of Sabrina Part 2 trailer that just dropped and it is completely stacked with footage. This new trailer, released March 18, reveals a lot about Part 2 of Season 1, out April 5 on Netflix, including a first look at a much darker Sabrina. Now that she's signed her name in the Book of the Beast and become a full-fledged witch, Sabrina Spellman is casting elaborate spells, as usual, but she's also killing men, bathing in blood (or washing it off), and trying to convince herself it's all "not so bad."

From the get-go in the trailer, her Aunt Hilda worries that "something is different" about her, minus just signing on to do the Dark Lord's bidding. As viewers have seen, Hilda and Ambrose are also full magical beings, but they're not outwardly evil, nor do they have evil intentions (at least, not all the time). So Hilda's anxieties are absolutely valid, and considering Satan's obsession with the youngest Spellman, her drastic turn to the dark side is concerning. But the most shocking reveal in the trailer comes at the very end, with a lingering shot on a new character in a blood-red outfit, suggesting Sabrina will come to face to face with the Dark Lord himself.

In that final scene, a disembodied voice tells Sabrina, "You have loved the power I have given you." While you might expect to see the horned beast Satan speaking these words, it's actually a man looking at Sabrina in a menacing way. "What is it you want from me?" Sabrina responds. And while the exchange might seem pretty normal for CAOS, there's something about it that heavily hints that this man is actually the Dark Lord, which means that question can only lead to horrible, terrifying answers. According to a report by TheHashtagShow.com, CAOS actually was casting a man to play the Dark Lord back in December. The humanoid counterpart of Satan is going to be named Lucifer Morningstar, and was reportedly described as "attractive, sophisticated and devilishly charming."

Per the official press release, the synopsis for Part 2 noted that Sabrina will be "exploring her darker side, curious to learn more about her heritage." It also pointed out that, while she's going deeper into her witchy side, she's also having a hard time staying present in the mortal world and in her friendships with Roz, Susie, and Harvey. The new trailer does show her getting more comfortable doing magic in front of them or involving them in her various schemes — with her disappearing in front of Roz — but the tensions have to be pretty high as well.

"I feel like I've been walking down this darker path. But maybe it's not so bad," Sabrina says in the trailer. Maybe, but the scratches on her back, all the blood, and the "uncharted territory" teased in the trailer all seem like bad news for the teen witch. As always, however, she's strong in her resolve. "I can choose to be afraid of my powers or I can choose to use them," she says.

According to Entertainment Tonight, the series' creator Roberto Aguirre-Sacasa said that Part 1 showed how very much Sabrina wants to keep her hold on the mortal world. But that in this second half of the season, Sabrina is letting her life lead the way, and "accepting this part of her life." He continued, saying that the witch is currently exploring, "What’s wrong with being a little bit wicked? I’m here — I might as well explore it." He added, "It’s a lot more about Sabrina embracing her darker, more wicked side.” Intrigued? You're definitely not alone.

Along with the already-hinted at love triangle between Sabrina, Harvey, and Nicholas Scratch, another juicy tidbit to know about Part 2 of CAOS is that it'll include a musical number in the finale, according to Aguirre-Sacasa. It's also been teased by Madame Satan (Michelle Gomez) herself that the final episode's script made her "[scream] out loud because something happens that even I didn’t see coming down the pike,” IndieWire reported.

This new trailer certainly gave fans a bit to stew over and enjoy before the second part premieres. Whether you're on Team Path of Light or Path of Night, Chilling Adventures of Sabrina Part 2 is going to deliver something you'll enjoy.