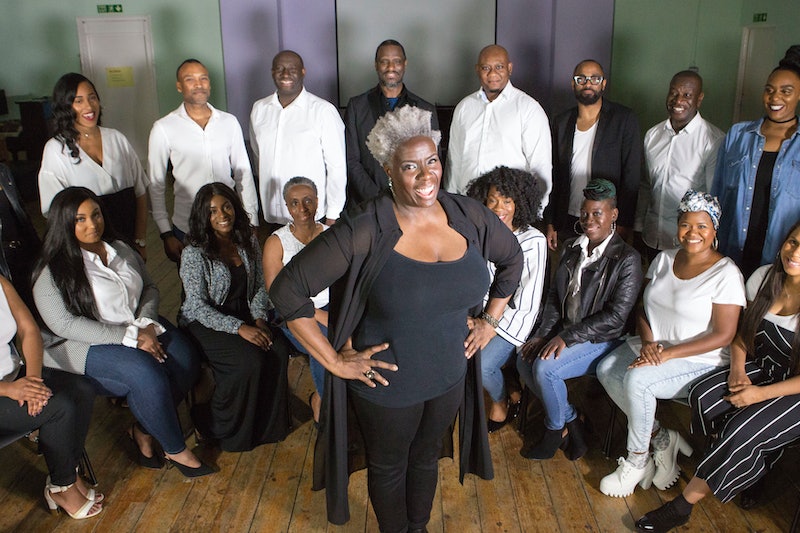 In April, Kensington Palace announced that Prince Harry and Meghan Markle had decided on musicians for their May 19 nuptials. The entire line-up is impressive, but the choir at the royal wedding — Karen Gibson and the Kingdom Choir — already has nearly 20 years of high-profile performances under their belt, according to their website, so they're more than prepared to be on the world's stage.

The Palace confirmed Harry and Markle's musical selection on April 24, tweeting that, "Both Prince Harry and Ms. Markle have taken a great deal of interest and care in choosing the music for their Service, which will include a number of well-known hymns and choral works."

They went on to share the full list of musicians that will be performing throughout the service, and praised the Kingdom Choir for, "creating a sound that demonstrates the community they share," as per the Palace's tweet.

Karen Gibson and the Kingdom Choir have been singing around the world for the last 20 years, according to their website, and the group is stacked with talent, no doubt about that. After the Palace confirmed their performance at the royal wedding, though, the choir announced that they'd be bringing some famous friends — "the finest from the worlds of gospel, pop and jazz" — along for the ride, too, according to the Choir's statement.

The group released their statement in response to the exciting news via the Kingdom Choir's website on Apr. 25. It reads,

The Kingdom Choir are pleased and honoured to announce that they will be performing at the wedding of Prince Harry and Ms. Meghan Markle on May 19th.

We are extremely excited to be taking part in such a historic moment, and know that it is one that we will always treasure. For this special day we have invited some friends of The Kingdom Choir — some of the finest from the worlds of gospel, pop and jazz — to join us.

The Kingdom Choir has yet to release any additional details about the special guests they'll feature, but they've long-been rubbing elbows with plenty of talented musicians — including UK singer, Jake Isaac, who asked the group to take part in his new music video, according to a photo the choir shared on Instagram.

"We are so honoured to be part of @iamjakeisaac’s music video!! COMING SOON!!!!" the Kingdom Choir posted on Apr. 25. "@iamjakeisaac, we are cheering you on, we celebrate you, and we love you! So excited for what’s to come! Keep shining!"

Of course, famous friends and royal wedding performances don't just drop into your lap overnight — the Kingdom Choir has been putting in work for a while. Gibson founded the Choir more than two decades ago, and over the course of her career — in addition to conducting and directing all 20 of the group's gospel singers over the years — she's been part of performances for dignitaries like Nelson Mandela, Desmond Tutu, Pope Benedict XVI, and former President Bill Clinton, according to the UK Choir Festival.

Gibson's also been to Buckingham Palace more than a handful of times, and has been performing for the royals as far back as 1995. That year, as per the UK Choir Festival, Gibson conducted a choir for VE Day celebrations at the Palace. The veteran musician would go on to conduct her own Kingdom Choir there during the Queen's Jubilee procession in 2002, and also performed for Prince Charles in 2011 with the Maria Fidelis Gospel School Choir.

So, yeah, Gibson's familiar with being in the royal spotlight — although, to be fair, performing at Harry and Markle's royal wedding will undoubtedly produce a spotlight of incomparable size given how many people from around the world will be tuning in. Regardless, Gibson and the Kingdom Choir are definitely going to shine.