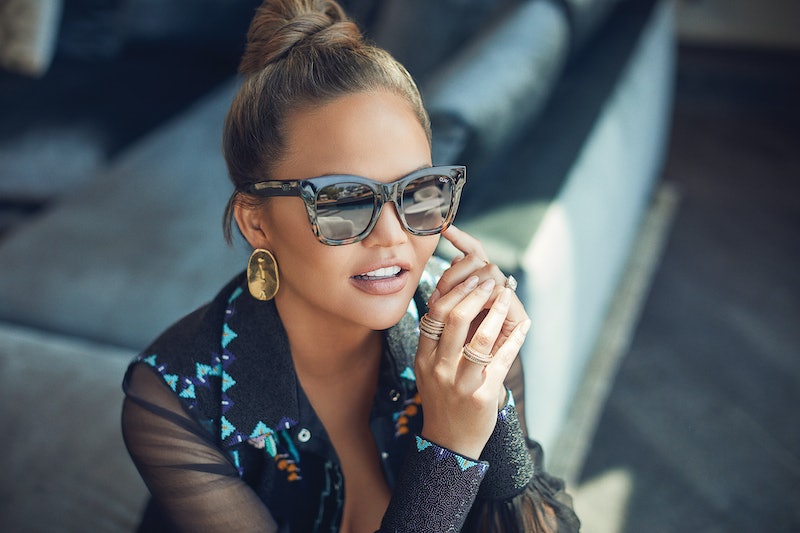 Twitter is a much more entertaining place thanks to Chrissy Teigen's clap backs and dry jokes. While the model-turned-entrepreneur-turned cookbook writer has a busy life, she spends a lot of her downtime in front of screens. (Who doesn't?) Which is why it's so fitting that there is a Chrissy Teigen x Quay collection that includes, in addition to sunglasses, a line of blue light glasses that will protect your eyes from the glow of screens.

Teigen has come across Quay a number of times over the years through Instagram, and quickly became a fan of Quay's trendy collections. And while Teigen has the budget to buy higher end designer shades, she said that she constantly got compliments on her Quay styles. "I was getting a lot of promo boxes from other people that have done collaborations with Quay, and every time I would wear them, I was always getting compliments on them," Teigen told Glamour. It worked on the reverse, too. "Every time I complimented somebody on their sunglasses, they would always be Quays.”

The Quay x Chrissy line is comprised of Quay’s best-selling frames in all-new, muted retro tones. There are eight pairs of sunglasses and seven pairs of blue light filtering glasses.

Teigen told Harper's Bazaar that she tends to like oversized sunglasses because she doesn't like to put on a full face of makeup, so many of the collection's frames are large. "We took the brand's shapes that people already know and love and changed the colors to enhance them and make them more my style. We went a little bit darker for fall and there are some mirror sunglasses, too," Teigen told the publication.

Blue light filtering glasses might not be the norm when it comes to eyewear, but Teigen believes it's something we need to adopt in order to take care of our eyes. "In 10 years we're going to look back and be like, oh my God, I can't believe we weren't all wearing these things," Teigen told Harper's Bazaar.

The glasses feature lenses with Blue Light Technology that helps block harmful light from screens that may cause health issues like headaches, blurry vision, and loss of sleep. Plus the prescription-ready frames can be taken to an optometrist to be filled.

Teigen shared that she and her husband, John Legend, wear the blue light filtering lenses while in bed as they watch TV and scroll through their Instagram feeds.

"We want to get people to open their eyes to the fact that these glasses could be beneficial. [After wearing them], I noticed I was getting less headaches, better sleep, and no more sore, dry eyes," Teigen told Harper's Bazaar. "I wear them at night when I'm in bed and John wears his so much. He needs a thick prescription, so we’ll both be in bed at night wearing our glasses while watching TV and scrolling the ‘gram."

The collection is already available on Quay.com and ranges from an affordable $50 to $60. Protect your eyes with lenses that are Teigen-approved.