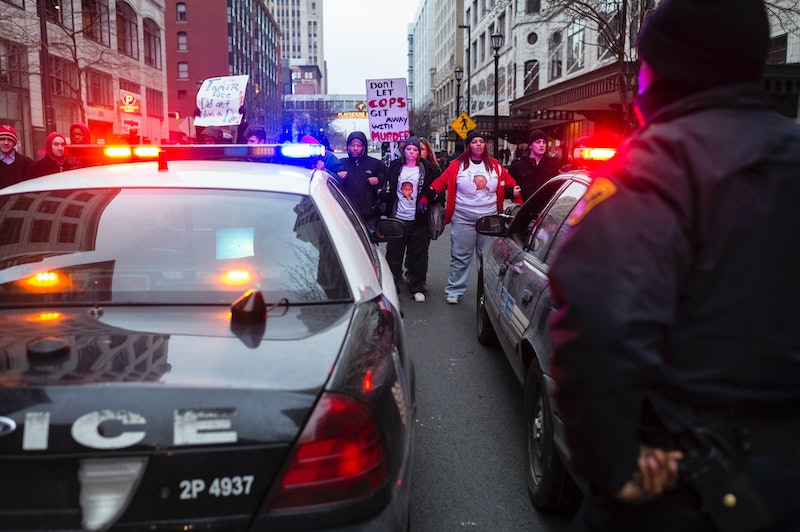 Nearly three years after he shot 12-year-old Tamir Rice, Cleveland police officer Timothy Loehmann was fired on Tuesday. Another officer, Frank Garmback, who was driving the patrol car a the time of the incident, was suspended for 10 days, which will start on Wednesday.

However, Loehmann's firing doesn't actually have to do with the events of the Rice shooting, but is a result of his decision to lie on his police application. Garmback was disciplined for driving Loehmann too near Rice. A grand jury decided not to criminally charge the officers in 2015.

In 2013, Loehmann failed a written test on problem solving, vocabulary, grammar, punctuation, and spelling for the Cuyahoga County sheriff's department. The year before, he had resigned from the Independence police department after five months following a poor performance review on his handling of firearms, which was not included in Loehmann's background check when he was hired by the Cleveland police department in March 2014.

According to The Plain Dealer, a local Cleveland paper, the performance review was completed by Jim Polak, the deputy chief of police in Independence, a Cleveland suburb. In the review, Polak described Loehmann as being "distracted" and "weepy" during his firearm qualifications:

He could not follow simple directions, could not communicate clear thoughts nor recollections, and his handgun performance was dismal. I do not believe time, nor training, will be able to change or correct the deficiencies.

On Nov. 22, 2014, Loehmann fatally shot Rice two seconds after arriving to investigate a call that someone was waving a gun around and pointing at people near a recreation center in west Cleveland. However, the emergency dispatcher did not tell Loehmann that the caller said that the person with the gun could be a minor or that the gun could be fake; it turned out that Rice was carrying a toy gun. Loehmann and Garmback were put on restricted duty while Cleveland sheriff's office investigated the shooting.

In 2016, the city of Cleveland settled a wrongful death suit with Rice's family for $6 million, set to be paid out over 2016 and 2017. In the settlement, which was estimated to be the largest payment Cleveland has made for a police shooting case, the city admitted to no wrongdoing. Many people were frustrated with Cleveland officials' handling of the case, as well as the grand jury's decision not to charge Loehmann.

While it does come off as a cowardly move to fire Loehmann for a situation unrelated to Rice's death, after facing so much backlash for not taking action sooner, Loehmann's firing provides, at the very least, some semblance of justice for Rice's family.