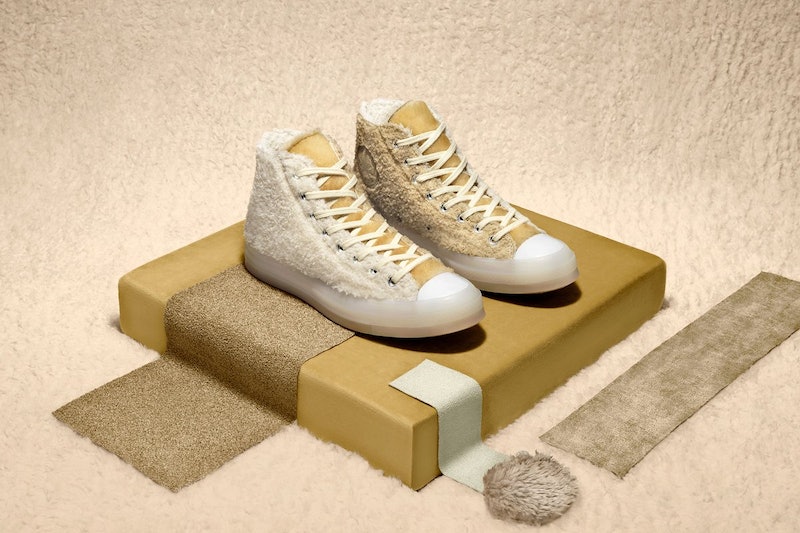 While you might already be daydreaming about short shorts and Italian ice cones, the reality of our situation is that winter is still very much here, and will continue on with its polar vortexes and chilly temps for another few months. So why not lean into that with a pair of shoes that will have you radiating hygge vibes. CLOT x Converse are releasing fuzzy high tops that are inspired by the North Pole, bringing the coziest shoes ever created by man to your wardrobe.

That's right, not even your insulated Uggs can hold a candle to these. CLOT is a Hong Kong streetwear brand that is a playful mix of both Eastern and Western cultures. It has done high profile collaborations with brands like Disney, Nike, and Coca-Cola, and even has a music branch that was responsible for bringing Kanye West to Hong Kong, making the city the only Asian stop on his “Touch The Sky” tour.

So suffice it to say it's a big brand that likes to get creative. Which is why its Converse collab is such a memorable one. Inspired by the "exploration of the polar landscape," the theme re-invents two of Converse's classic styles: the Chuck 70 and the Jack Purcell. They are remade with cozy and arctic elements that will have you reaching for a cup of hot chocolate in no time.

Inspired by Polar Bears, the Chuck 70s are high top sneakers in a mix of real and faux furs in shades of light brown and creamy white. They're fuzzy and mimic your childhood teddy bear, giving new meaning to the teddy bear trend that took over fashion this year. And for extra winter-based comfort, Converse considered the issue of wearing sneakers in the dead of winter, when the temperatures are especially icy. To solve this, the shoes are fur-lined on the inside. They also feature clear soles that have a polar bear paw print stamped on the bottom, transforming your footstep into an animal print.

The second shoe in the collection is the Jack Purcell, which is a white lace up sneaker decorated in a microfiber synthetic suede and faux fur texture. Just like its high top counterpart, there is a polar bear paw stamped on the bottom of the sole, tying in the North Pole theme.

Then to make the purchase extra special, both shoes come in a special shoe box that features CLOT’s own photo from the North Pole. The styles will be available to purchase starting Feb. 1 at JUICE locations both in-store and online, with prices to be released.

This isn't the two brands' first collab together though, where CLOT joined teams with Converse in Dec. 2017 to share their own take on the classic 1980s basketball shoe, the Converse Fastbreak Mid. Coming in two different colorways that include one pair being purple and orange, and the other coming in light blue with cream accents, they make memorable shoes. And if you want to get funky shoes that are basically winter epitomized, then these new North Pole inspired Converse are the way to go.