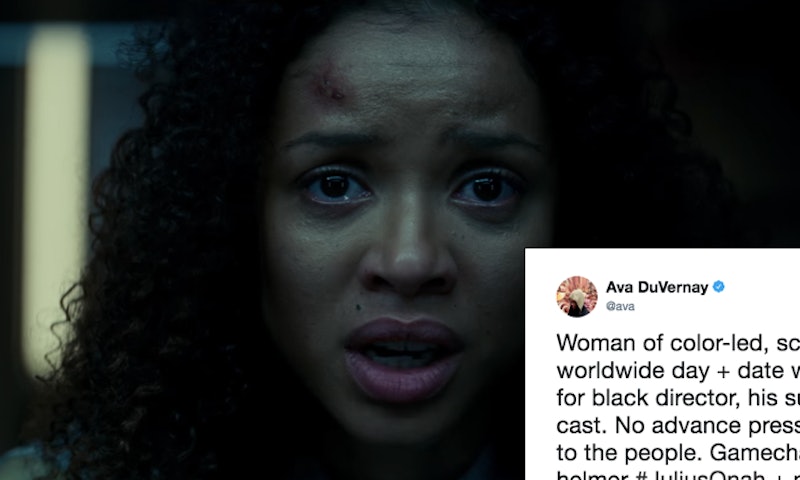 Thriller fans are getting a surprise gift at the end of the 2018 Superbowl. In a shocking move, the Cloverfield sequel is streaming on Netflix after the game. The trailer for The Cloverfield Paradox made its debut during the game just hours before the film itself will become available. A follow-up to 2016's hush-hush release 10 Cloverfield Lane, The Cloverfield Paradox has been similarly kept under wraps. But as of Feb. 4, audiences can see what all the fuss — or lack thereof — is about.

On Super Bowl Sunday, Deadline reported that an anonymous source relayed the groundbreaking release plan. In late January, the same outlet reported that rumors were flying about Netflix possibly acquiring the rights to The Cloverfield Paradox, then known as God Particle, which theoretically meant that the secretive sequel wouldn't have a traditional theatrical release, instead being distributed solely or mostly via the streaming service. The same article stated that Netflix would get the Bad Robot film in front of viewers' eyes before Paramount Pictures' projected release date for the movie — April 20. The Feb. 4 piece noted that this weekend was the original planned release date, which was perhaps a clue that the Cloverfield sequel was ready to go, despite the studio angling towards a spring opening.

Fans of the J.J. Abrams-produced franchise should know by now not to expect the third Cloverfield movie to be more than tangentially related to the first two. While the 2008 movie was a jerky, found-footage monster movie, the 2016 follow-up leaned more toward psychological thriller. And none of the group of friends who were terrorized in the first movie recurred in the second. (Though, spoiler alert, not many of them survived anyway.) Instead, 10 Cloverfield Lane focused on Michelle (Mary Elizabeth Winstead), who's taken prisoner along with Emmett (John Gallagher Jr.) by a high-strung doomsday prepper (John Goodman). The sequel was less concerned with what was happening in the outside world than the precarious situation Emmett and Michelle negotiated with their captor inside, but the non-human monsters made their appearance soon enough. The teaser trailer for the new movie reveals that might actually be something of a prequel to the original, showing how the monster made it to New York City in the first place.

Before the Super Bowl, not even a still or a teaser poster had been released for the third movie in the series. No plot synopsis has been made available. Heck, we didn't even know any of the actors who were cast. On Sunday night, Selma and A Wrinkle In Time director Ava DuVernay immediately shouted out the movie for its representation after the trailer dropped. David Oyelowo and Gugu Mbatha-Raw are among the ensemble (which also includes Chris O'Dowd and Daniel Brühl). Julius Onah directs.

But while the trailer that was released during the game is the first taste most casual fans got of the movie, Cloverfield sleuths have been working over time to dig up whatever they can. The first movie's cryptic online marketing campaign was an Easter egg hunt that rewarded the curious. Playing alternate-reality games (or ARGS) unearthed clues, as did visiting websites tied to the movie, including one for Slusho (a sugary, frozen drink familiar to avid watchers of Abrams' Lost) and Tagruato, a Japanese off-shore drilling company.

So the Cloverfield Reddit knew where to look, according to IGN. They found that the Tagruato website is being hacked because the company is embarking on a renewable energy initiative. 4182028.com shows messages from a man who protests the initiative, who is identified as Mark Stambler — curious, because Stambler is also the last name of Goodman's 10 Cloverfield Lane character.

What exactly will these details have to do with the new movie? Fortunately, you'll only have to wait until the end of the fourth quarter to find out.