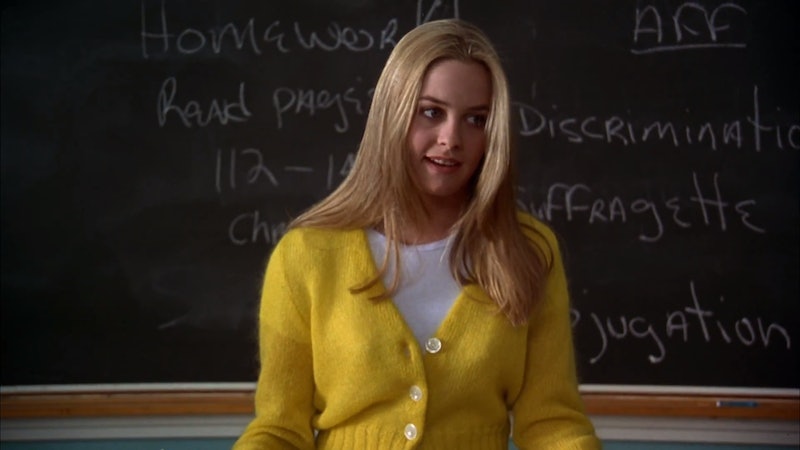 This cast reunion will have fans totally buggin'. On Saturday, March 23, the cast of Clueless reunited at the Chicago Comic & Entertainment Expo or C2E2, according to BuzzFeed. Alicia Silverstone and Paul Rudd were joined by their costars Donald Faison and Breckin Meyer for a reunion panel. The actors took the opportunity to catch up, but also revealed some interesting behind-the-scenes details about working on the film.

The 90s favorite has become a cult classic in recent years, and event attendees even dressed up as the main characters, as per the Chicago Tribune. During the panel, the stars treated fans to new details about the filmmaking process and their iconic roles. Silverstone discussed playing Cher Horowitz, telling the audience the character was beloved to her as well, according to Us Weekly. "I loved playing Cher," she said. "It was such a fun character and working with these guys, every one of them was so much fun. I didn't know who that girl was, so it was really fun to be her. Because it wasn't how I lived my life."

Meyer, who played skateboarding stoner Travis Birkenstock, also discussed his character. Meyer revealed that Sean Penn's character in Fast Times At Ridgemont High, another teen classic, was the inspiration for his character, as per the Chicago Tribune. Meyer also reportedly skateboarded to his audition, and attended the same high school as Silverstone, though the two were not friends at the time. Faison, who played Dionne's boyfriend Murray, discussed filming the legendary freeway scene. "I remember that day because that was the day I got to kiss Stacey Dash," he said. "So, I had prepared myself."

In addition to participating in the panel, the stars also shared pictures of the reunion on social media. Silverstone posted a selfie with Rudd on Instagram, captioning the photo, "Such a sweet reunion last night at dinner with my pal #PaulRudd. I love this guy! I mean he ordered vegan for both of us..... Swoon. One more day to go at #c2e2, hope to see u tomorrow!"

The star also shared a picture with Faison and Meyer, writing, "So much fun hanging out with these boys today #paulrudd @donald_aison and @breckinmeyer! They had me laughing so hard on our panel. Such a great day at #c2e2" Faison reposted the same cast photo and captioned it with a Clueless quote, writing, "Rollin’ with the homies...#clueless." Meyer shared the selfie on Instagram as well, captioning the picture, "We. Have. No. Clue."

According to Us Weekly, the panel wasn't the only time the Clueless cast has reunited. "This isn't the first time we have all gotten together," he said. "We all live in California and work in the same industry so we run into each other all the time." Even so, it was special for fans to see the old friends and former cast mates back together again. The four stars took the opportunity to share some new details from set and get the old gang back together again for a super '90s reunion.