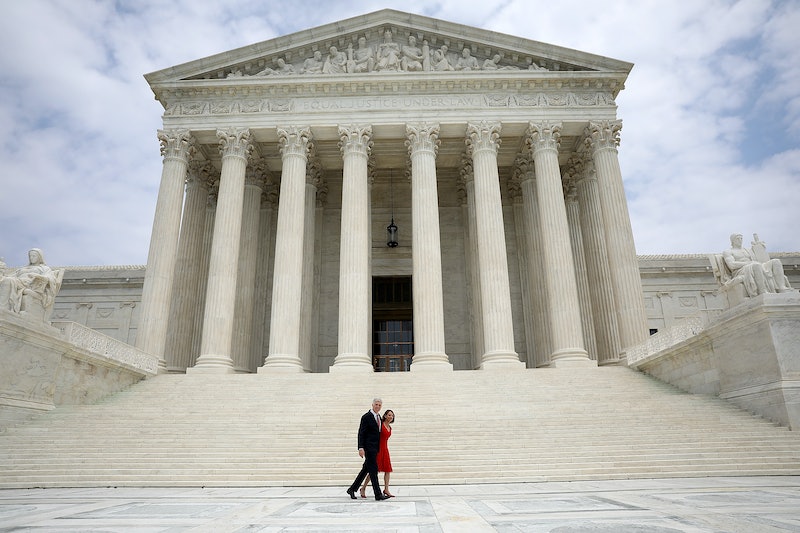 The ongoing social struggle over rights for same-sex couples will soon take a big step in one direction or the other: On Monday morning, it was announced that the Supreme Court will take a case about same-sex wedding cakes. The subject of the case is a baker in Colorado who refused to supply a cake for a same-sex wedding.

Jack Phillips, the owner of a Colorado bakeshop and a born-again Christian, started this legal journey in 2012, when a gay couple came to him to order a cake for their wedding celebration and he refused to do it. The couple, Charlie Craig and David Mullins, had already gotten married in Massachusetts, but they were holding a reception in Colorado.

BuzzFeed reports that Craig and Mullins then challenged Phillips in court under Colorado's anti-discrimination law, which bans discrimination on the basis of sexual orientation. The court ruled in favor of Craig and Mullins, and a Colorado appeals court then upheld that decision. When the Colorado Supreme Court decided not to take the case, Phillips then asked that the U.S. Supreme Court put it on their docket.

Whichever way the ruling goes, this will be an important case for both same-sex couples and Christian conservatives, who claim that being forced to provide services for same-sex weddings violates their religious freedom.

The previous rulings in the case from the lower courts have rested on the idea that when a person creates a business in the public space, they must follow the anti-discrimination laws on the books for the state in which they're operating. The same-sex couples, the courts have said, are entitled to equal protection under the law.

On the other hand, Phillips and other people in his position, like the New Mexico photographer who refused to work at a lesbian wedding, claim that the anti-discrimination laws are in fact a violation of their First Amendment rights to the free exercise of religion. States that force them to provide services at events that they don't support on a religious basis, they say, are forcing them to express a view that they don't find acceptable — namely, that they support gay marriage.

What the question will come down to, then, is whether forcing businesses to comply with anti-discrimination laws actually has anything to do with the "freedom of expression" that is protected under the First Amendment. People like bakers and photographers are in fact selling creative services, religious-rights activists claim, so their work constitutes "artistic expression."

The Supreme Court's decision to hear this case comes right on the heels of another ruling involving gay rights, in which they decided that same-sex couples are entitled to equal rights as regards birth certificates. The fact that the Supreme Court has decided to hear the case, however, indicates that the law is not yet settled.

Needless to say, many people will have reason to closely follow the Supreme Court's decisions when they begin their term in October.