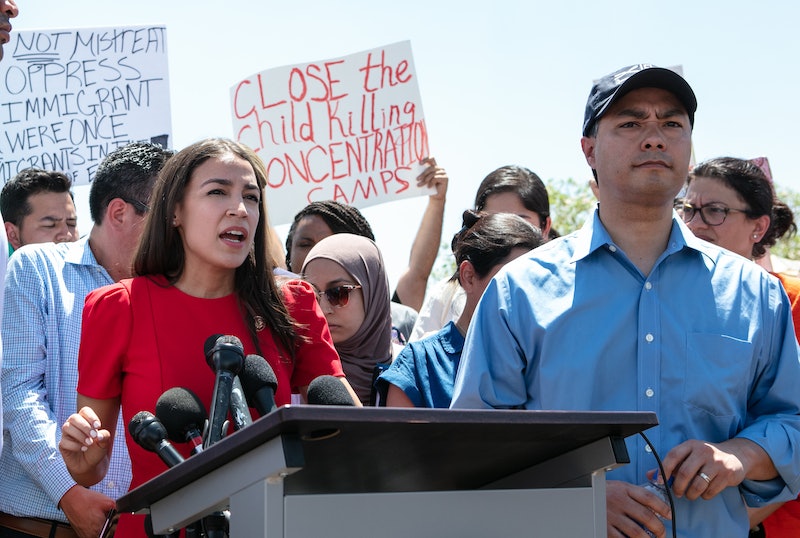 Over the past several days, more and more troubling information has leaked out about the conditions at immigrant detention centers on the United States' southern border. Reports describe cramped cells full of people, no soap and toothbrushes, and clothes unwashed for weeks. On Monday, a group of Democratic members of Congress blew the story open when they visited the centers themselves and began sharing what they saw with their constituents. The members of Congress detailed everything they saw at the Border Patrol facilities, and at least one thing is clear — they were very alarmed with what they found.

"Just left the first CBP facility. The conditions are far worse than we ever could have imagined," Pennsylvania Rep. Madeleine Dean tweeted on Monday. Dean was part of the group trip, many of whom shared their reflections using the hashtag #DemsAtTheBorder. "15 women in their 50s- 60s sleeping in a small concrete cell, no running water. Weeks without showers. All of them separated from their families. This is a human rights crisis."

According to a video that Michigan Rep. Rashida Tlaib tweeted outside of one of the facilities, CBP officials would not allow the members of Congress to take any pictures inside, so they all had to wait until after their visit to share what it looked like inside.

One politician did somehow manage to record some footage inside a facility, however. Texas Rep. Joaquin Castro posted a photo and a video of a group of adult women, all detained in a single cell.

"At the El Paso Border Patrol Station #1, women from Cuba, some grandmothers, crammed into a prison-like cell with one toilet, but no running water to drink from or wash their hands with. Concrete floors, cinder-block walls, steel toilets," Castro tweeted on Monday. "Many said they had not bathed for 15 days. Some had been separated from children, some had been held for more than 50 days. Several complained they had not received their medications, including one for epilepsy."

The other members of the group all told versions of the same account, together painting a dire picture of what the detainees are living through at the United States border. However, according to Politico, detainees told several congresspeople that the conditions were actually even worse than what they saw. Border Patrol organized the tour and required that the congresspeople wait 48 hours before their visit, Politico wrote, and they mainly showed the visitors either empty or orderly spaces.

“They tried to show us orderliness, cleanliness," Texas Rep. Marc Veasey told Politico. But when members of Congress spoke to people that were being detained in the holding cells, that’s not what they described... They described being deprived of daily showers and certain other rights.”

The group gave a press conference after the visit, according to The Guardian, in which they addressed both the conditions inside the camp and the ProPublica report that revealed a secret Facebook group for Border Patrol agents. In addition to joking about migrants who had died attempting to cross the border, the group also contained derogatory posts about Rep. Alexandra Ocasio-Cortez, who was part of the group to visit the facilities.

"I see why CBP officers were being so physically [and] sexually threatening towards me," Ocasio-Cortez tweeted after her first visit. "Officers were keeping women in cells [with] no water [and] had told them to drink out of the toilets. This was them on their GOOD behavior in front of members of Congress."