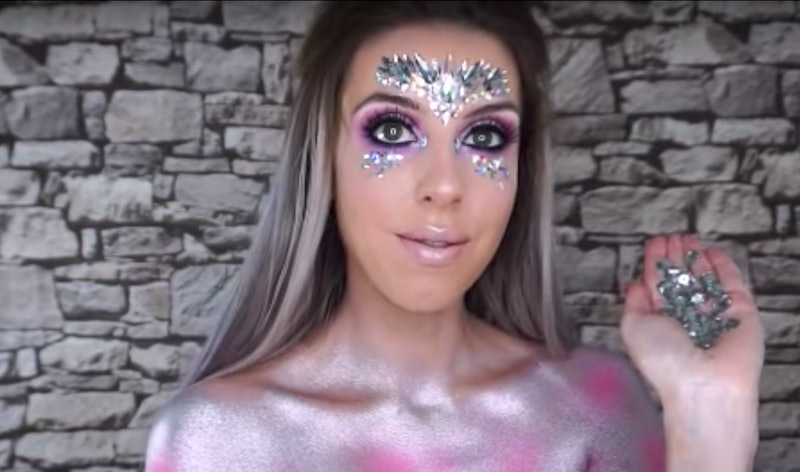 In May, BBC Scotland’s The Social posted an instructional video on Facebook, showing how to get “glitter boobs” — that is, festival-ready breasts covered in jewels and glitter. After critics flagged the content as inappropriate, the BBC defended its “glitter boobs” tutorial. The broadcaster said that the video was aimed for an audience of young adult women and that, despite the criticism, most of the feedback has been positive.

Can I just take a moment to say that “The BBC defended its ‘glitter boobs’ tutorial” is not a sentence that I ever thought I would write? What a glorious world we’re living in.

Bejeweled breasts have been a trend this year at music festivals, especially Coachella and Glastonbury. In The Social’s video, a woman named “Charlene” demonstrates how to get the glitter-boobs look. She starts with a layer of silver and pink paint, covers her nipples with jeweled appliqués, and then covers her chest in more jewels and glitter.

When The Social posted the video online, reviews were mixed. “Just because her nipples are covered, doesn't make it burlesque. This really strikes me as inappropriate content,” one commenter wrote. Another argued that the video is “crass and objectifying” and wrote, “Complained about this last week, got told to expect more of the same so unfollowed after seeing this again today. What a shame as your other content is good but I think you need to have a think about what messages your sending out with this content.”

Others had a more positive reaction. One person wrote, “I honestly can't believe the negativity towards this woman. Glitter boobs? How could you be offended by that. I love it. In a world gone PC mad it's refreshing.” Another commented, “Great for festivals. love it well done you girl...can't see what all the fuss is about no nipples showing.. guess some don't understand it's just art.”

The BBC has stood by the video. According to The Telegraph, a BBC spokesperson said of the controversy,

The Social has a specific remit to create content aimed at 18 to 34 year olds and the topics covered are led by our audience. In this case the content was all produced by young women and aimed at their peers. The overwhelming response from the 160,000 who viewed it was very positive.

Honestly, my first thought upon watching the video was, “How do you get the glitter off at the end of the day? Does it just come off in the shower? Will it destroy the plumbing?” Apparently, I’m not the only one who’s worried about the practicalities of glitter boobs. One commenter wrote, “I must be getting old, all I can think of is how much of a bitch the bath-tub/shower will be to clean afterwards.” Another added, “[C]an you imagine, you would be finding glitter in your bed sheets and towels for months after.” So maybe glitter boobs aren’t for everyone. To each their own!