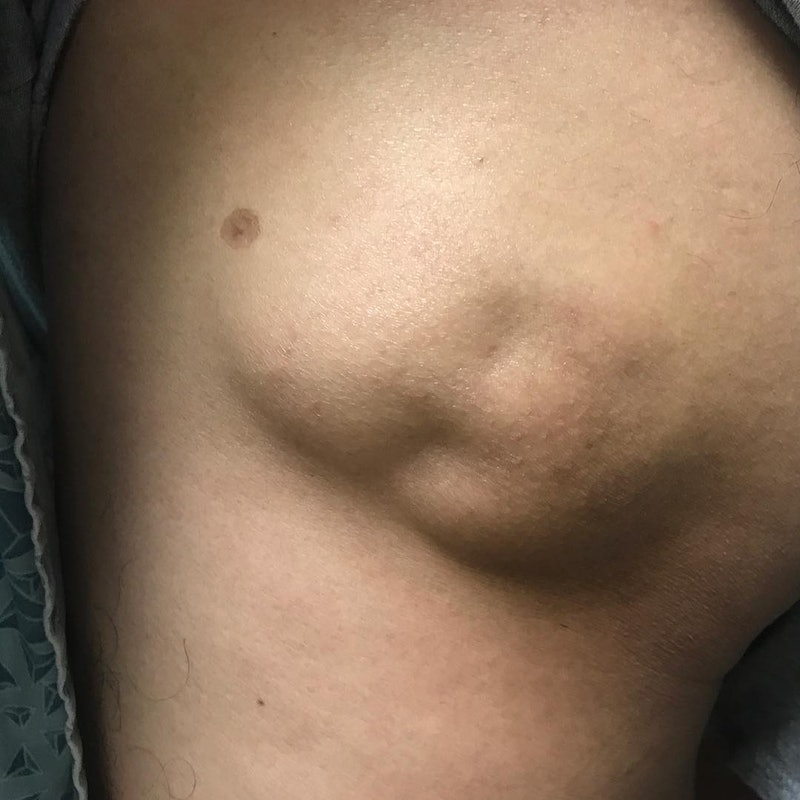 There are two types of people in this world: those who have never heard of Dr. Pimple Popper and those who are full-fledged, diehard #popaholics. While you might be part of the former, you are not necessarily in the majority, surprisingly enough. Dr. Sandra Lee, more commonly known as Dr. Pimple Popper, has garnered a loyal audience of over 2 million followers on her Instagram account and almost 3 million subscribers on her YouTube channel. She has also launched her own skin care line, SLMD, and content website, DrPimplePopper.com. Turns out, people love watching Lee pop pimples, extract blackheads, and slice into cysts. For some, the thumbnail image of one of her patients' cases alone is enough to make their stomach turn, but for others, it's an invitation to watch something oddly satisfying.

Although many of Dr. Pimple Popper's videos are arguably nauseating to watch, Lee didn't create her account to gross anyone out. In fact, she doesn't find any of her patients "gross" at all. Her account was an accident that was spurred by her fascination with what she does.

Lee tells me she started an Instagram account because dermatology "is very visual." Her first extraction video was of a blackhead. "We don't really extract too many blackheads," she tells me as we sit inside the gorgeous and zen Ole Henriksen Spa in West Hollywood. "But we got this really good blackhead, and I was like, 'Let me put this extraction on video.'" Lee saw a big increase in the amount of likes this video got compared to her other posts, so she uploaded another to see if the spike in interest was just a fluke.

"I did it again, and then I got another jump, so then I posted a full video on YouTube and since then, it was like, I kept throwing logs in the fire, just to see what would happen," Lee says. "And it just grew. That was two-and-a-half years ago."

And the rest was pimple-popping history. Since then, Lee has seen a lot — and I mean, a lot of different bumps and lumps of all shapes and sizes from all sorts of patients, both young and old, male and female. But what's the craziest case Lee has ever seen during her time as a dermatologist? Before revealing, she asks me if I can handle it. I tell her that I am a self-proclaimed popaholic, to which she smiles and continues with her story.

"So this guy came in and he actually has had this since he was five or so...," Lee says as she pulls up her phone and scrolls through her video album. Images of cysts and blackheads fly by as she pulls her down the screen. After a minute, she finds it. I brace myself and look at the video still. "Where is that?" I say confused, trying to locate where this misshapen lump could be on this man's body.

"His daughter [brought] him in because his daughter is a popaholic," Lee says, which apparently is a common way many of her patients find her — their children are huge fans of Lee's.

"At first I thought it was a lipoma, which is like a collection of fat, because it was so big and he had it for so long and he never squeezed anything out of it," Lee explains. "Usually, you’d be tempted to do something, I would think."

But it wasn't a lipoma — it was a cyst that had been building up for years. "I jumped when I opened it," Lee confesses. Even she was surprised when she operated on the man.

She presses play and I proceed to watch the video — gray liquid starts to spill out of the cyst — a color I have never, ever seen come out of any sort of being, except maybe a zombie in a movie. As alarmed as I am, it's not as unusual for Lee, who has seen the color before. I ask her how she can stay so calm and collected with her patients.

I ask Lee if she's ever had to excuse herself during a procedure, especially one this shocking.

"No, I’ve never had to step away. This is my job — I’m not going to walk away and be disgusted by it," Lee tells me.

Either Dr. Pimple Popper has a super high-tolerance for stomach-churning visuals or she just totally loves what she does. And after spending some time with her, I've decided it's definitely both, but mostly the latter. Lee lives for helping her patients transform their skin, so expect many more #popaholic videos in the future, whether you're a fan or not.

More like this
How To Get Wednesday's "Soft Goth" Lip, Straight From The Makeup Designer
By Audrey Noble
Jenna Ortega's Hair Routine Occasionally Involves Washing Out Fake Blood
By Olivia Rose Ferreiro
The "Washed Denim" Trend Is A Modern Way To Wear Blue Eyeshadow
By Olivia Rose Ferreiro
Hailey Bieber's Best Hair Moments Of 2022
By Audrey Noble
Get Even More From Bustle — Sign Up For The Newsletter