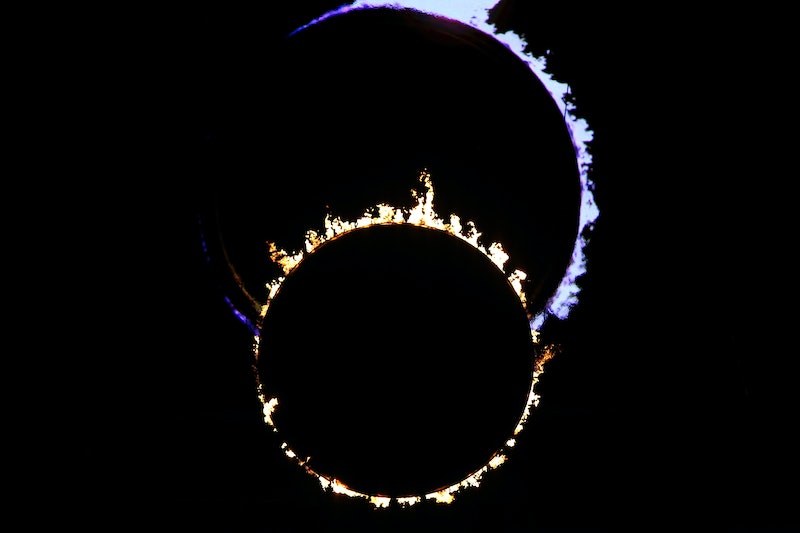 Think about how many bizarre things people have believed and still do believe about the full moon. It's a non-phenomenon that happens every single month, and there are a lot of stories. People throughout history have believed the full moon has special powers for both good and evil forces alike — so it's no surprise that people also believed in solar eclipse superstitions.

People believed that the moon inspired lunacy, or could evoke labor, love, or chaos — and even today, people are quick to blame things on the presence of a full moon. Now, back to the solar eclipse, an event that's actually really rare to see in the same place twice, and an event that is both shocking and stunning to see. An event that makes the world that we know and understand opposite for a few moments. Just think about the word "eclipse": it comes from the ancient Greek word "Ekleipsis" which literally means "abandonment." It's been around for a while! Now, think about how many people throughout history came up with wild stories about the effects of the solar eclipse — you guessed it, a lot.

Any natural event that's a rare spectacle is bound to be laced with all kinds of meanings and implications. Imagine what the people before the days of Google thought about the eclipse. They must have been terrified and amazed. They might have thought the world was about to end, or that something miraculous was about to happen. For us, the solar eclipse is just science; we understand it for exactly what it is, so we don't need to make up stories or speculate. But that wasn't always the case. These are some of the wildest things people have thought of the solar eclipse throughout history:

The ancient Chinese also believed that the sun was being eaten by some mythological giant creature, but for them, they thought it was a dragon. They would bang pots and shout until the sun reappeared, and when it did, they believed it would bring good fortune to their emperors — essentially, for them, an eclipse meant good luck was on its way.

The Pomo group, a Native American tribe from Northern California, believed that a bear was fighting with the sun, and literally taking bites out of it. The Pomo name for the eclipse even translates to "Sun got bit by a bear." They also believed that a lunar eclipse was the same bear taking a bite out of the moon. So similar to other early civilizations, the would make nose try to chase the bear away from the sun and the moon to protect them.

The people of ancient Korea believed in a mythological giant dog that was responsible for taking a bite out of the sun. They would make lots of noise from the ground to chase off the dog.

In ancient India, people would get into a body of water and immerse themselves up to their neck during a solar eclipse. They did this as an act of worship to show the sun how much they respected it, while they prayed away the darkness. They worried the eclipse would have very negative effects on their health and well being — they were particularly worried about their disabled, senior, and pregnant population, and would bury them in sand or keep them indoors during the eclipse, out of fear it would worsen their health.

The ancient Chippewa tribes of North America shot flaming arrows into the sky, worried the sun had lost its fire, or dropped its torch. Sure enough, after a lot of shooting at the sky, the sun would regain its fire, encouraging their beliefs.

It's clear to see that without the scientific understanding of what an eclipse actually is, the loss of light sent people into a frenzy — and can you blame them? Think about what it's like when even now, you're in your office or a public place and the power goes out. Even with your modern mind and understanding of how sometimes things like that happen, your first instinct is to panic. It's no wonder ancient civilizations resorted to their imagination and fears to comprehend the epic event. We're lucky to have the understanding that we do, it allows us to enjoy the event and celebrate the natural wonder.

More like this
Picky Eater? Sensitive Stomach? This Vet Nutritionist-Designed Dog Food Has A Plan For That
By Maria Cassano
Dog Trainers Say These 30 Cheap Things On Amazon Are Pure Genius
By Allison Bolt
Amazon Keeps Selling Out Of These Pet Products Because They're So Freaking Cheap & Clever
By Sara Brown-Rigoli
24 History-Making Black Women You Probably Didn't Learn About In School
By Ayana Lage and JR Thorpe
Get Even More From Bustle — Sign Up For The Newsletter
From hair trends to relationship advice, our daily newsletter has everything you need to sound like a person who’s on TikTok, even if you aren’t.