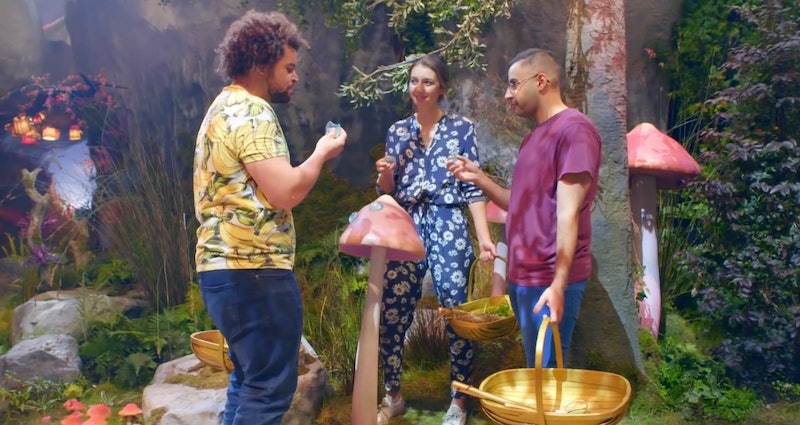 Come June 23, foodies across the pond will get to know the cast of Crazy Delicious, which aired in the UK earlier this year. It's hosted by comedian Jayde Adams and features a "magical, edible world" in which the set is filled with ordinary-looking objects that you can actually eat, including edible blossoms, chocolate soil, and a drinkable babbling brook. It's basically like Willy Wonka's chocolate factory come to life.

Each episode features three different contestants vying for the "Golden Apple" through a series of challenges. Judging each of their creative dishes are the "Food Gods": Heston Blumenthal, Carla Hall, and Niklas Ekstedt.

"In Crazy Delicious we're asking for dishes that not only taste great but are also visually spectacular, emotionally powerful and nostalgic so it's incredibly tough," Blumenthal said in a statement via Channel 4. "The cooks in Crazy Delicious were certainly fearless. I've spent my career trying to perfect these kinds of dishes and I know from experience that creativity and perfection do not always sit comfortably together. I was amazed at how ambitious some of the cooks were."

Get to know more about all 18 of the Crazy Delicious contestants below — and visit their Instagram accounts for some seriously hunger-inducing shots, too.

Originally from Seattle, the mom of two is also a professional singer who believes that "food should make you happy."

The sports teacher rated his "mean competitive streak" as "probably around a solid nine and a half" on a scale of one to ten. His style of food is inspired by his Afro-Caribbean background, as well as the places he's traveled.

A student pursuing a degree in IT and math, Lily is a baker with "a serious sweet tooth."

Tiffany was born in Taiwan but moved to California when she was 12. Because she now has a child of her own, she likes to make her food "quite cutesy sometimes," and creates edible, "adorable little characters."

With an Italian mother and a Bangladeshi father, Tony's food is a fusion of his parents' heritage. He tries to "bring out the best of both of those worlds" in his dishes, and comfort food is his favorite.

The food blogger and photographer makes a lot of experimental vegan food because she's vegan herself, and describes her specialties as "indulgent comfort food with a healthy twist."

Lara predominately makes sweets, including chocolates and cakes. "Anything that's made out of sugar, I will make it," she joked on the show, adding that she likes to push boundaries and always wants everything to be perfect.

Mark's goal with everything he makes is "to hit Michelin-star standard," and he describes himself as being "probably in the top five or 10% of cooks." He's also a "huge Heston fan," and even nearly named his son after the "Food God."

The Lebanese math and physics tutor considers her food style to be "creative, a bit crazy, but also yummy." She loves celebrating "everything natural with a twist."

As a full-time youth worker, Adam uses cooking "all the time" in his job to engage with and inspire young people. His preferred cooking method is to flame-grill his food because the smoke and char bring an element he says you don't get in a kitchen.

What sets Hannah's food apart is utilizing primarily "foraged, wild ingredients." The seasonal supper club chef's goal is to highlight the "many unusual ingredients out there that people aren't aware of."

The self-described "very nervous person" got into cooking because he used to do it with his mom. Now, he creates experimental food that is both flavorful and "really interesting to look at."

Harry says he's been cooking most of his life and even made his first croquembouche at 13 years old. He had "quite a scientific upbringing," which fueled his interest in "the science behind cooking" and inspired his use of various shapes in his dishes.

Gabi's "big Italian family" inspired her passion for food, and she learned to cook her first pasta sauce with her mom when she was "about seven or eight." She naturally gravitates toward sweet food and like to make "things that just look crazy but taste amazing."

Describing her flavor combinations as "a bit wacky," Elainea jokes that her son, who has Asperger's, is never quite sure what she's going to serve him. She and her son are inventive together when they talk about food, and she's not scared of a challenge.

The self-proclaimed "king of comfort food" is a full-time food blogger whose mom is his "number one fan." When Chris is cooking, he aims to have diners ask for "fourths and fifths and sixths 'cause it tastes that good."

A "groovy gran," Lynn loves the science of food but didn't start experimenting until her sons moved out. She says she likes to "make something that nobody's ever made before to make people think, 'Oh, I would never have put that ingredient with that.'"

Hanelore started baking and cooking "properly" last Christmas and "just couldn't stop." She describes herself as "a bit of a geek" and always tries to incorporate literary and film characters into her food.

More like this
Bachelor Nation's Blake Horstmann Is Dating 'Love Is Blind' Star Giannina Gibelli
By Jake Viswanath and Radhika Menon
Move Over, 'Sunset'! The Drama-Filled Trailer For 'Selling The OC' Is Here
By Nola Ojomu
Here’s Everything Coming To & Leaving Netflix In July
By Grace Wehniainen
What’s New On Netflix: The Return Of 'The Umbrella Academy'
By Arya Roshanian
Get Even More From Bustle — Sign Up For The Newsletter