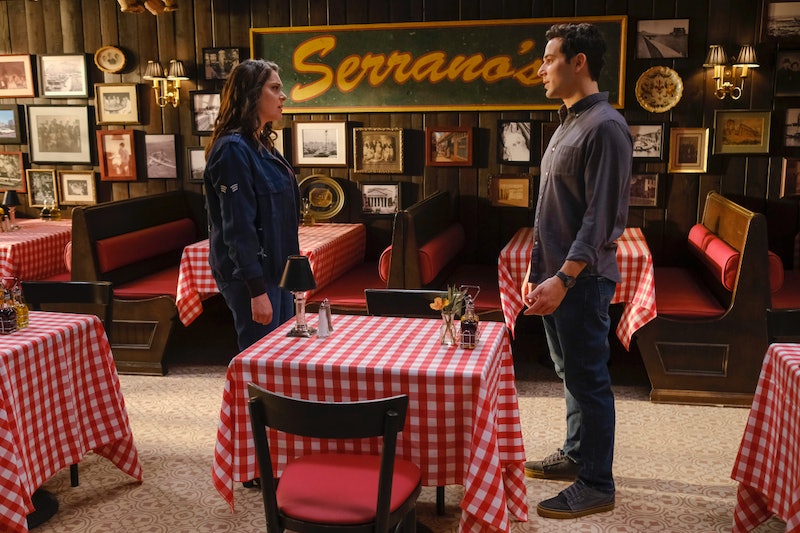 Spoilers ahead for Crazy Ex-Girlfriend Season 4, Episode 16. "Dr. Akopian, do you watch The Bachelor?" Rebecca asks her therapist, upon casually "running into her" at a coffee shop. She clarifies that Josh, Nathaniel, and Greg proposed a similar competition to help her choose between them: go on one date with each of them, then pick who she wants to be with. It's certainly an unorthodox — and highly unrealistic — way of deciding who to date, but that's part of the point Crazy Ex-Girlfriend's Bachelor parody is trying to make. The Bachelor is a simulated atmosphere — one in which grand, romantic gestures and big proclamations of love abound — but in real life, the deepest expression of love are often some of the quietest. And only one man in Rebecca's life seems to understand that.

In Crazy Ex-Girlfriend's March 29 episode, Josh and Nathaniel do their best to pull off a Bachelor-style date and sweep Rebecca off her feet. Josh sets up a tent and fire in her front yard to recreate the summer camp where they first met and bring things full circle, while Nathaniel sets up a hillside picnic with sweeping views just above The Greek Theater. He gets the dates mixed up, so instead of hearing The Greatest Hits of Broadway with Michael Bublé, they hear Seventies Groove Night with Marty Macaroon and the Funky Town Eight, but they dance the evening away nonetheless. When Rebecca reports back to Paula, she says her time with Josh's was "perfect" and being with Nathaniel was "heaven."

Further driving home the Bachelor parallel, Rebecca's friends begin feverishly debating who she'll pick — so much so that they even put money on it. (It seems unlikely there's a big Bachelor betting circle going on, but those Bachelor fantasy leagues do get pretty competitive).

Greg, meanwhile, initially had no problem keeping things casual (all of the men agreed to a $50 date limit). He is, after all, a very laidback guy, and big gestures aren't really his thing. But when he realizes how intense the whole competition has gotten, he panics and decides to take Rebecca on a hot air balloon. Fortunately, his car breaks down and ruins his plan. Then, both exhausted by the competition, Rebecca and Greg come clean to each other that they didn't want to go. And thank goodness they did, because instead of flying high above the Temecula Valley in a balloon that absolutely does not have a bathroom, they decide to instead order in.

In a quiet but incredibly romantic scene, the two of them sit in a dirty auto shop, gently arguing about what kind of food to eat. When they decide on the new taco place that just opened on East Cameron, their eyes brighten simultaneously. "Do I like chilaquiles?" Greg asks Rebecca casually, knowing she'll remember. It's in these ordinary exchanges that their chemistry shines through.

Despite Nathaniel and Josh's best efforts, it's clear why Greg's date is the winner regardless of who Rebecca chooses. He doesn't have to put on any airs or wear an aggressive bowtie to prove his love for her. If that were the case, there may be some confusion as to whether Rebecca really chose Greg, the person, or the elevated version of himself he was trying to be just to impress her.

After all, isn't that why so many Bachelor marriages fail after the camera stops rolling? They forged relationships in a fantasy world in which they wore gowns and tuxes and traveled all over the globe — they didn't get the chance to see how they'd fare coping with the mundanities of everyday life, like arguing over take out or waiting for a car repair. And while yes, romance is nice, it's these moments that are the true test of love. It's then that you really get to see your partner — no bells and whistles needed.

Plus, when you really think about it, Rebecca and Greg have several relationship cornerstones. They've been able to move past the betrayal, and then forgiveness, that came with Rebecca sleeping with Greg's dad. And both have been able to grow as independent people — Rebecca with her mental health, and Greg with getting sober — before reuniting. If they can accomplish that growth together, they'll really be gold.

Crazy Ex-Girlfriend has yet to reveal who Rebecca will end up with, but this episode pretty strongly hints it. And when Greg turns to Rebecca and quietly says "You're the love of my life. You know that, right?" it's enough to turn even the staunchest of Josh and Nathaniel supporters.