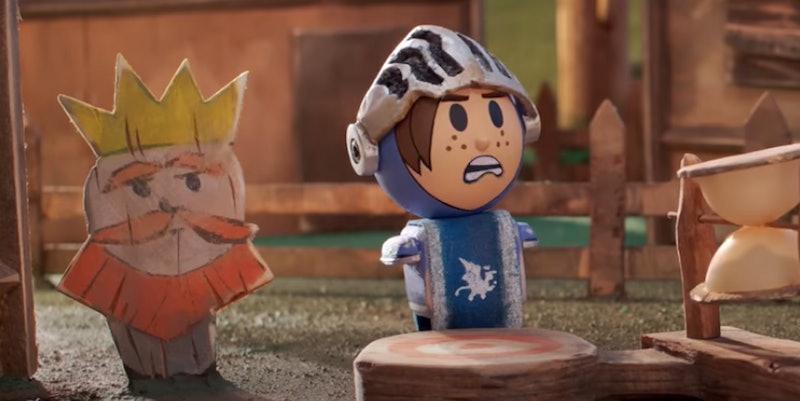 What do you get when you combine violent medieval battles, raunchy humor, and an A-list voice cast? Hulu's Crossing Swords, apparently. Hailing from the executive producers of Adult Swim's Robot Chicken, the 10-episode stop-motion series follows a kind-hearted peasant named Patrick who scores a position serving as a squire at the royal castle. However, his dream job devolves into a full-fledged nightmare when he learns more about the corrupt rulers and crooks who run the kingdom, including the Queen, who has her own personal sex dungeon (yes, there will be nudity).

Among the stars bringing the show to life are Nicholas Hoult, who most recently top-lined Hulu's period series The Great. He's primarily known for his work in Warm Bodies, Tolkien, and The X-Men franchise, but this isn't his first endeavor into voice work. He also voiced Captain America and Harry Potter in a 2012 episode of Robot Chicken. Now, he's taking the lead as Patrick.

See...er, hear them in action when Crossing Swords premieres on June 12.

More like this
Wait, Is Barney Stinson Related To Sophie On 'HIMYF'?
By Gretchen Smail
Everything To Know About 'Only Murders In The Building' Season 3
By Gretchen Smail and Kadin Burnett
Everything To Know About Hulu's 'How I Met Your Father' Season 2
By Shannon Barbour
A Teen Murder Victim's Horrific Diary Entry Helped Police Find Her Killer
By Brad Witter
Get Even More From Bustle — Sign Up For The Newsletter