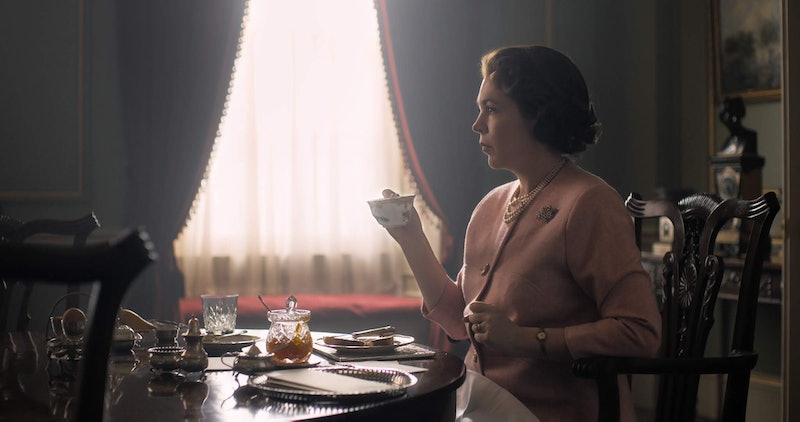 All hail the Queen! The Crown is finally returning, and a new royal subject is taking on the role of England's ruling monarch. Netflix just released the first Crown Season 3 teaser, giving fans their first glimpse at Olivia Colman as Queen Elizabeth II, and revealing that they can finally watch the new episodes on Sunday, November 17.

Season 3 of the royal Netflix phenomenon comes nearly two years after the second season premiered in December 2017. As reported by Variety, the new season will begin in 1964 and span until Margaret Thatcher's election as Prime Minister in 1979, covering major cultural events, like Beatles-mania, throughout the two decades. Deadline also reported that characters like Camilla Parker Bowles will also appear on the show this season.

Colman is taking over the role from Claire Foy, who portrayed Queen Elizabeth II for the show's first two seasons, and just by the teaser alone, it's clear she will be a worthy successor. The new teaser shows a close-up of one of the palace's lavish rooms, before Colman walks into the frame as the Queen, giving a piercing stare at the camera. Complete with her crown and gloves, the actor looks uncanny, and just her look is enough to have fans convinced she's going to knock the role out of the park.

Colman is not the only new girl in town. The entire cast of The Crown's third season is different due to the gradual aging of the characters, something that creator Peter Morgan told Variety he would do when the show premiered back in 2016, if it got renewed for third and fourth seasons.

This is Colman's second time playing hugely influential British royalty, following her brilliant, Oscar-winning turn as 18th-century monarch Queen Anne in The Favourite, and if she has it her way, she'll keep playing royal characters for a long time. "It’s in my contract now — I’ll only play queens!," Colman joked to Entertainment Weekly in December 2018.

While filming The Crown, Colman became just a little obsessed with England's reigning monarch — even though she's not a huge fan of the monarchy itself. "Not sure I was ever a monarchist — I wasn’t — but the Queen is an incredibly impressive human being, and I’m slightly obsessed with her," she explained on actor David Tennant's podcast, as reported by Town & Country.

"It sort of goes against, I suppose, my general set of beliefs," she continued. "But then, [the royals are] humans, and I don’t hate any humans. And they didn’t put themselves in that position. And there’s massive debates we could have about this, but she in particular as an individual made a vow as a very young woman to serve her country, which is an extraordinary thing to do. And she genuinely has stuck to it. I think that’s amazing."

Fans will get to see if Colman's take on the Queen is just as amazing as the monarch herself in November.

More like this
Nicola Coughlan Shared A Lady Whistledown Excerpt From ‘Bridgerton’ Season 3
By Grace Wehniainen, Alyssa Lapid and Sam Ramsden
Here's When 'The Crown' Season 5 Will Premiere — And What To Expect
By Bustle Editors
'The Crown's Matt Smith Reveals Prince Harry's Hilarious Response To The Series
By Bustle UK
Watch The Thrilling Teaser Trailer Of 'Shadow And Bone' Season 2
By Gretchen Smail and Jack Irvin
Get Even More From Bustle — Sign Up For The Newsletter