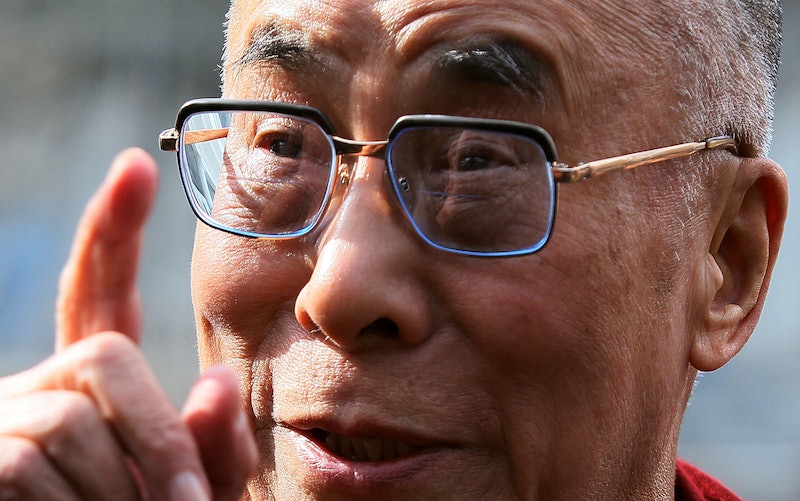 As former president Barack Obama completes his five-day tour around the globe, Obama and the Dalai Lama sat down to talk world peace in Delhi, India on Friday. According to an official report by the Central Tibetan Administration (CTA), the Dalai Lama praised the exchange between the two figures and noted that each was particularly interested in promoting global unity. But that's not all — according to the CTA, the Dalai Lama and Obama are actually great friends.

It was very good. I think we are really two old trusted friend[s]. I mentioned to him that now time has come for us to promote the sense of oneness among seven billion human beings. It is sad to see there are so much differences among people.

Kasur Tempa Tsering, spokesperson for the Dalai Lama, added that the exchange between him and Obama almost lasted an hour. According to Tsering, the Dalai Lama directly told Obama that, "'You are not only a former U.S. president but you are a Nobel laureate, you are young and you can do a lot. We should fulfill our aspiration for world peace. Maybe my generation will not see the results, but your generation will definitely see the results." On Twitter, the official account for the Dalai Lama shared a photo of the two figures talking to each other.

This isn't the first time that the Dalai Lama and Obama sat down to talk. In fact, Friday's get-together was the sixth time the pair has met up. In June 2016, while he was still the president of the United States, Obama met with the Dalai Lama at the White House.

The Dalai Lama's comments on global peace arrive a few months after he made observations on America's current political climate and the present leader, Donald Trump. In October, while discussing the United States with The Washington Post, the Dalai Lama commented on what he perceived to be rising nationalism in the country under Trump's reign, especially under his America First policy approach.

Trump's America First policy states that it will pursue an American-centric approach to gain a "stronger and more respected" status in global ranks. Justifying the slogan, the White House's primer on America First says,

With a lifetime of negotiating experience, the president understands how critical it is to put American workers and businesses first when it comes to trade. With tough and fair agreements, international trade can be used to grow our economy, return millions of jobs to America’s shores, and revitalize our nation’s suffering communities.

Anti-racism activists have expressed caution against the term, America First, as it has been used by white nationalists.

Keeping Trump's "America First" chant in mind, the Dalai Lama minced no words while talking about ultra-nationalist tendencies in the country. In comments delivered to The Washington Post in October, the Dalai Lama took notice of Trump's America First slogan and cautioned against ultra-nationalistic attitudes while saying, "[American] ancestors really considered the importance of liberty, freedom, democracy, these things," the Dalai Lama said. He also described Trump as a "selfish nationalist" in the interview. The Dalai Lama, who is viewed as a pro-peace and anti-nationalist figure said, "The present president, in the very beginning he mentioned 'America first.' That sounded in my ear not very nice," he said.

It wasn't just Trump's hyper-nationalism that unsettled the Dalai Lama. He also said the American president's stance on the environment wasn't comforting. But ultimately, he respected Americans' prerogative to elect him as the president of the country. "The present President is not much paying attention to ecology. So on that, I feel some reservation," he said. "But anyway, the American people elected him, so I must respect [that]."