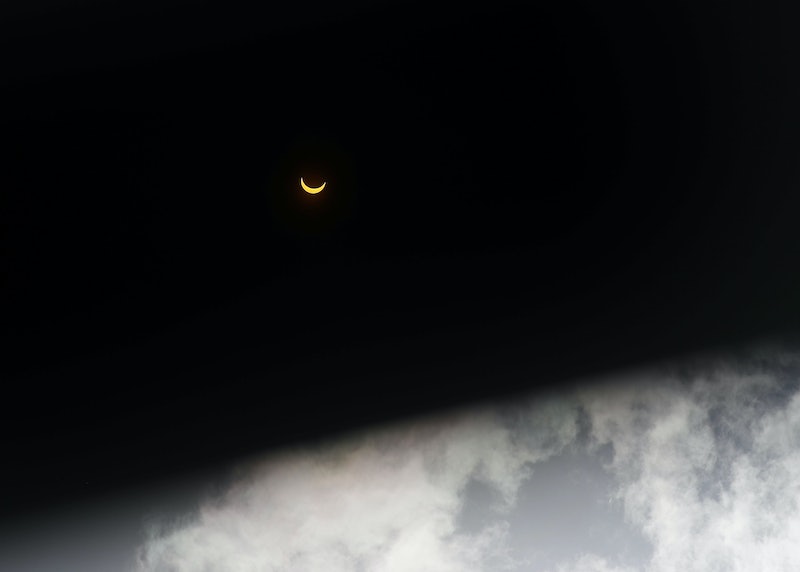 Is the moon okay? Someone should check on the moon.

Some wild stuff has been going on in the sky. It is just barely the second month of the year and there have already been an unprecedented TWO full moons; one of which occurred the same time as a Blood Moon, a Blue Moon, and a super moon. Many people claim January's strange astrological activity had noticeable effects on the ~supernatural~ aspects of their lives, so what can be expected this month? As it turns out, the next few weeks also have some celestial surprises in store, and a lot can be said about the Dark Moon's spiritual meaning.

After full moons were twice as nice last month, perhaps it only makes sense the lights would dim this time around. In February, we will be privy to a phenomenon called a Dark Moon. Put simply, a Dark Moon (also called a black moon sometimes) is pretty similar to its name. Though there are two known definitions, in this case the term "dark Moon" is used to describe a new moon that takes place during a month when there is no full moon. This month the new moon falls directly in the middle of the month, on February 15. For what it is worth, the sky will be pretty dark the days before and after the new moon, as well.

So what is the deal with all the wacky, mismatched lunar activity? There is a pretty logical answer, actually.

According to the Astronomical Applications Department within the United States Naval Observatory, the typical lunar cycle, or lunation, takes place over the course of approximately 29.5 days. It begins with a new moon, when the moon is positioned between the Earth and sun, with the bright side facing away from earth, leaving none of its face visible to those on Earth. The cycle concludes with a full moon, when the entire face is illuminated. But as made clear this year, the cycles do not always link up with the calendar.

Since the moon has existed far longer than calendars, it makes sense that maybe the inner self reacts more sensitively to planetary movements than it does to the changing of days. Much of the speculation about the spiritual impacts of the legendary dark moon can be linked to the dark moon goddess Lilith. Lilith's origins can be traced to a number of sources. Some paint her as a feminine, fertile goddess similar to the Roman Venus, and some claim she was a demon. In astrology, she has come to represent "primal, impersonal, creative source which seeks manifestation beyond the material or emotional," according to Astrology Club. In recent history, the symbols of Lilith and the Dark Moon have been embraced by feminist movements.

According to Dark Astrology, symbolically the Dark Moon and Lilith represent, "...the lunar apogee. [They] does not exist as a physical point in space, but is a point that describes the distance between the earth and the moon, the empty focus."

With this dark, rebellious being being inextricably tied to the occurrence of the Dark Moon this month, it is likely you will feel her presence within you in the forms of boosted creativity and empowerment. It is possible, with the air of empty focus mixed with passion, you will feel the urge to shelve the responsibilities you feel are less vital to your creative self. Maybe try to find new, creative ways to accomplish the things you need to.

2018 is shaping up to be an astrologically unprecedented year already, and only one month has passed. If you felt a spiritual shift during last month's Super Blue Blood Moon, chances are you will again with February's Dark Moon.