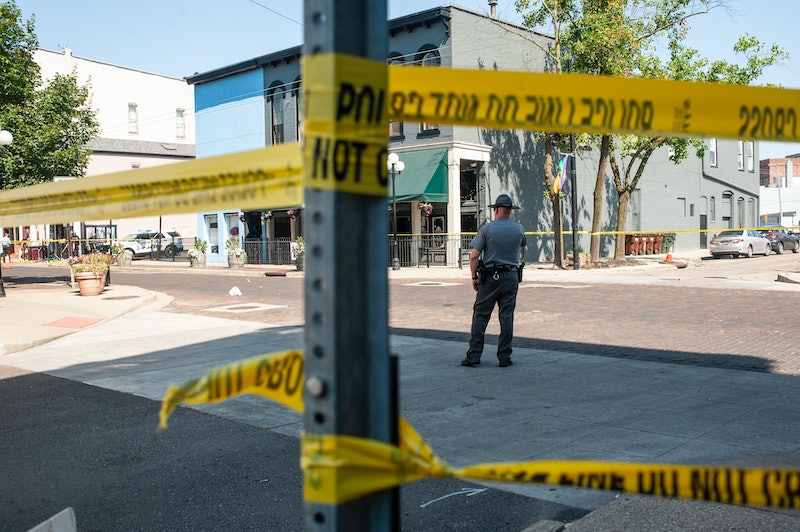 Less than 24 hours after a gunman took the lives of 20 people at a Walmart in El Paso, Texas, the number of mass shootings in 2019 rose yet again when a shooter opened fire in an entertainment district in Dayton, Ohio, killing multiple people. One week ago, several people were killed and injured at a garlic festival in Gilroy, California.

This most recent incident of mass violence in Ohio took place in the late night/early morning in an area of Dayton where many people were enjoying their night at bars and restaurants on East Fifth Street. The New York Times reported that there were more than 1,000 people in the area when the shooting began around 1 a.m. Police were already nearby on routine patrol, according to The Times, and responded quickly, killing the shooter before more were injured.

Definitions of mass shootings vary widely, depending on whether it focuses on the number of people who died or the number of people who were injured. According to The New York Times, this is the 32nd mass casualty shooting in 2019, using the Justice Department definition of three or more deaths at one time. The Gun Violence Archive, a nonprofit that tracks gun violence incidents, reports there have been 253 mass shootings this year when using the definition of four or people "shot and/or killed in a single event."

As a mark of solemn respect for the victims of the terrible acts of violence perpetrated on August 3, 2019, in El Paso, Texas, and on August 4, 2019, in Dayton, Ohio, by the authority vested in me as President of the United States by the Constitution and the laws of the United States of America, I hereby order that the flag of the United States shall be flown at half-staff at the White House and upon all public buildings and grounds, at all military posts and naval stations, and on all naval vessels of the Federal Government in the District of Columbia and throughout the United States and its Territories and possessions until sunset, August 8, 2019.

Many 2020 presidential candidates also spoke out about the violence.

The shooting at the El Paso Walmart is being investigated as domestic terrorism, as authorities reportedly found that the gunman had extremist and white supremacist connections. That shooting, as well as the one in Dayton, are suspected to have been carried out by young, white men.

More like this
6 Organizations Fighting Police Brutality That You Can Support Right Now
By Syeda Khaula Saad and JR Thorpe
Here’s Where The NHS Nurses’ Strike Currently Stands
By Sophie McEvoy
8 Charities To Donate To During Black History Month
By Alexis Morillo
These Artists Are Reimagining Black History Month To Create A Better Future
By Katie Mitchell
Get Even More From Bustle — Sign Up For The Newsletter
From hair trends to relationship advice, our daily newsletter has everything you need to sound like a person who’s on TikTok, even if you aren’t.