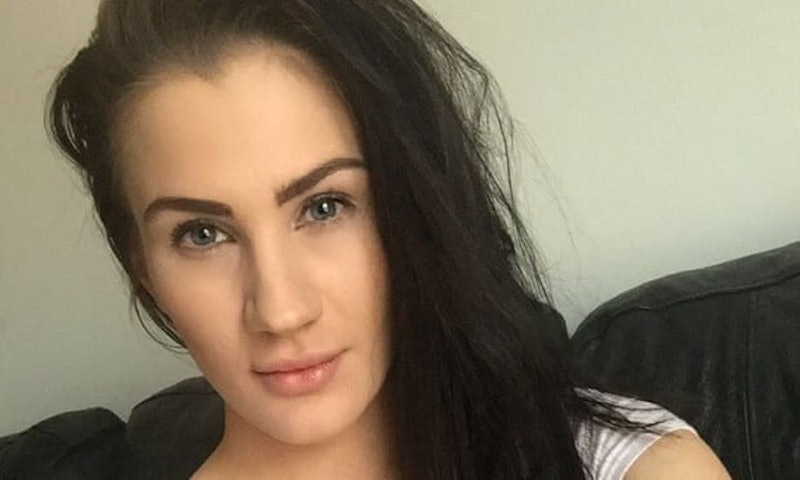 After the passing of any young person, there are always questions. The main one being: why? The unfairness of a life cut short is immeasurable, but add to that a layer of mystery and you are left with an altogether more difficult question: how? Or even, more chillingly: in what way? The Death Of Aimee Spencer tells this particularly harrowing story.

If you are a fan of British reality TV, Spencer's face may be familiar to you. Spencer appeared briefly on hit MTV show Geordie Shore, according to the Mirror. But at the time of her tragic and unexplained death, Spencer was working in the adult industry under the stage name Carla Mai.

On 11 July 2016, The Sun reports, Spencer was found naked, unconscious, and with severe injuries on a patio, having fallen two stories from a kitchen window. Sadly, she died as a result of her injuries two weeks later when her family were left with no choice but to remove her from life support. But how did all of this happen? What led to Spencer's tragic fall, and what information is out there?

ITV's The Death Of Aimee Spencer looks to answer those questions, piecing together different parts of the story. Presenter Katie Piper interviews family members including Spencer's sister Daria who, according to ITV, said:

"We were told that she went out the window, they didn’t say how. Was she pushed, did she go out on her own free will? That was the main question. My sister is scared of heights, what was she doing climbing out of a window?"

The window from which Spencer fell was in a Brighton flat owned by a man named Daniel Lewis, The Sun reports. Lewis was arrested but never charged in connection to Spencer's death. Instead, he was found guilty of seven counts of possessing class A, B, and C drugs with intent to supply, and one count of possessing ketamine, according to The Sun.

In The Death Of Aimee Spencer, the details of her passing are reexamined using the available evidence, as well as "interviews with detectives, bodycam footage from officers at the scene and footage of key developments during the probe," the Daily Mail reports.

An inquest into Spencer's death in 2017 found that she was "under the influence of drugs" when she died, the BBC states, with ketamine and cocaine being found in her system. However, the exact circumstances that led to her falling from that window remain unclear. Toxicologist Dr Olaf Biedrzycki told the inquest, "There was no sign of sexual assault, pressure or a knife injury. I can't exclude a criminal act, but I cannot prove that," according to the BBC. They also report that the toxicologist stated that "the drug mix could have put Ms Spencer in a dream-like state."

On the camera footage from his arrest, Lewis admitted to police: "I've used some drugs, I've used some cocaine and Diazepam," the Daily Mail reports. Police also found the following message from Lewis on Spencer's phone: "Get in, get your kit off, get Helen making balloons while I'll make a line under your nose as long as a yeti's leg."

While Spencer was initially handed down a two-year suspended sentence, the Solicitor General intervened and referred the case back to the courts, suggesting the sentence was too lenient. As the UK government reports, he was then handed down a three year custodial sentence. “By selling large quantities of dangerous, high-purity drugs, Lewis was destroying the lives of others to support his own lavish lifestyle," Robert Buckland QC MP, Solicitor General, explained. "I am pleased that the Court of Appeal has seen fit to bestow a custodial sentence on him today.”While we will never know what happened in the run up to Spencer's untimely passing, The Death Of Aimee Spencer is heartbreaking but revelatory piece of TV.

Watch The Death Of Aimee Spencer on ITV February 14th at 9 p.m.