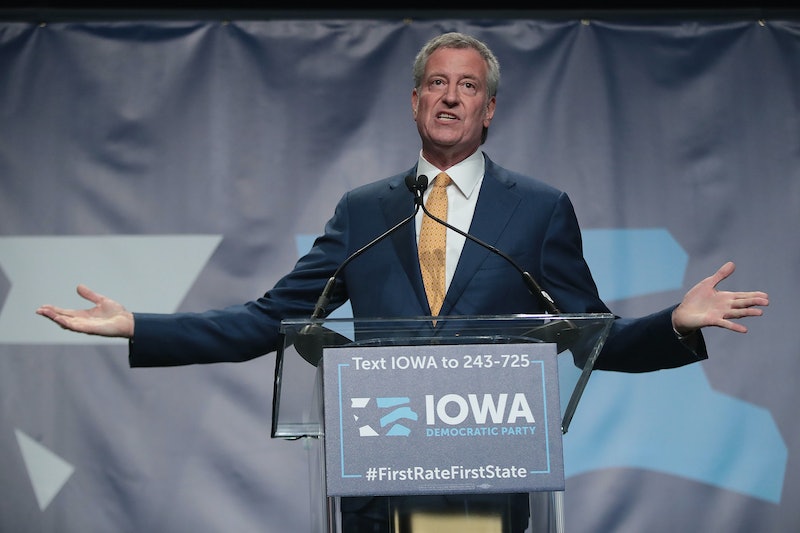 The mayor of New York City is running for president, and his campaign appears to be a family affair. Bill de Blasio shared debate advice from his son on Monday in the form of a series of WhatsApp screenshots posted to Twitter, asking for insight on how to behave at the upcoming Democratic primary debates this week. But many people weren't having it — and some even suggested the back-and-forth between de Blasio and his son, Dante was staged.

On Monday afternoon, de Blasio tweeted, "Lucky to have the talented, debater Dante de Blasio helping me get ready for Wednesday!" Attached to the tweet were three screenshots, which opened with a not-so-subtle message from dad:

Dante, the debate's coming up. I'm preparing intensely, but I must admit I'm a little nervous. What advice do you have for me? Thanks! Love you! Dad

At another point, de Blasio peppered his son's apparent debate success into their conversation, writing, "You were a champion debater: tell me how I can really make my presence felt on that stage." Dante's responses matched his father in tone. He wrote at one point, "Make sure your message is straightforward, talk about your accomplishments, and treat your opponents with respect."

There were also a few stabs at humor. Dante wrote to his dad,

First of all, you're going to have to establish credibility, especially among skeptical young voters. Tell the story of how you met mom while working as a young staffer at city hall and weave it into a reflection about how hard it is to find, like, "the one" on tinder.

You can read the full message transcription here, if you haven't already. The tweet immediately sparked attention towards de Blasio, probably not in the way he intended. Many, many Twitter users were not buying this conversation at all, for a number of reasons. Here are some of the responses from the Twitter universe following the family chat: