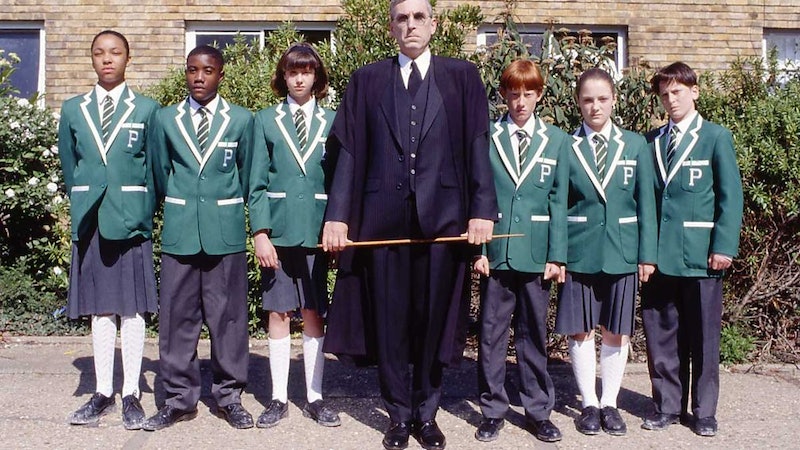 If there's one thing I miss about being a kid, it's the beauty of after-school TV. Sitting down in front of classic shows on CBBC and CITV with a Lunchable and a Capri-Sun in hand made the arduous school day totally worth it. While the kids who enjoyed the iconic shows of the late '90s and early '00s are now young adults — myself included — it seems as though broadcasters have learnt that some TV formula never get old, as the BBC's The Demon Headmaster is coming back along with a bunch of other cult classics you'll recognise from your childhood.

Based on a series of novels by British author Gillian Cross, The Demon Headmaster followed a group of schoolchildren who soon realise that their Headmaster has the ability to hypnotise their fellow students, and intends on controlling the entire school — and the world. The series contained six books, and was later adapted to television for BBC to scare an entire generation of kids between 1996 and 1998, as Pretty52 reports.

After Cross published a new entry for the series (The Demon Headmaster: Total Control) in 2017, it was only a matter of time before the book was adapted into a new TV series, which is exactly what BBC are doing. Adapted by writer Emma Reeves, the series will contain 10 30-minute episodes that will follow "a group of mis-matched kids" as they fight their Headmaster "who manipulates their every move," the BBC reports. Frightening stuff, eh?

While the role of the titular antagonist is yet to be announced, the OG Headmaster Terrence Hardiman seems thrilled that a new generation of children will be able to experience the frights and horror of the original series. "I have happy memories of working in The Demon Headmaster in the nineties, and I wish every success to the new production," Hardiman told Radio Times. "I expect to be totally hypnotised." The actor also spoke with SciFiNow last July about the possibility of a reboot, to which he replied: "I'm too old to play it, I think... but one never says never!"

"But I cannot see any possibility of it happening, and if they wanted to redo it, reboot it, I'm sure they would get another actor."

As much as I want to agree with that, I really can't think of anyone else that would be able to pull off that death stare. Hardiman's performance still haunts me to this day, even if it was only a kids show.

Along with The Demon Headmaster, the BBC are also bringing back Crackerjack. Originally airing from 1955 to 1984, this classic Friday afternoon show of games, comedy, and music is back, and will now be presented by Sam Nixon and Mark Rhodes, otherwise known as Sam & Mark (y'know, the duo that presented TMi with Caroline Flack).

Not to sound old, but I'm feeling very nostalgic thinking about today's kids rushing home from school to catch these TV shows, just like our generation did.