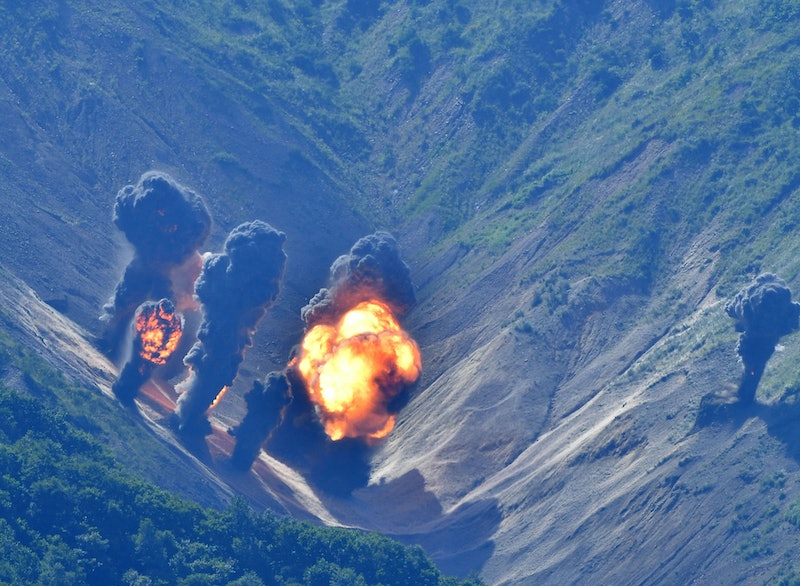 On Sunday, North Korea reportedly tested a hydrogen bomb for a long-range missile, the latest in the recluse nation's continued efforts to pose a threat to Western nations like the United States. While experts remain uncertain about North Korea's actual capabilities, the reports from Sunday's test could suggest a concerning development: The difference between a hydrogen bomb and an atomic bomb could mean greater devastation in the event of an attack.

According to Reuters, North Korea's latest nuclear test was also its most powerful. The Kim Jong-Un regime reportedly launched a hydrogen bomb designed to be mounted on an intercontinental ballistic missile (ICBM). While there was no independent confirmation that the warhead launched on Sunday was, in fact, a hydrogen bomb, Reuters also reported that the test was 10 times more powerful than North Korea's last nuclear test and strong enough to register with international seismic agencies as a manmade earthquake.

First, let's start with the similarities: Both atomic bombs and hydrogen bombs rely on nuclear power. In other words, they're both types of nuclear weapons. In practice, they can both be mounted on long-range missiles like ICBMs to be fired from a long distance, such as across an ocean.

For perspective, the bombs dropped by the U.S. over Hiroshima and Nagasaki during WorldWar II were atomic bombs. According to USA Today, those atomic bombs released about 15 and 20 kilotons of explosive power, respectively. Meanwhile, the first hydrogen bomb tested by the U.S. in 1952, shortly after the bombings of Hiroshima and Nagasaki, released some 10,000 kilotons of explosive power.