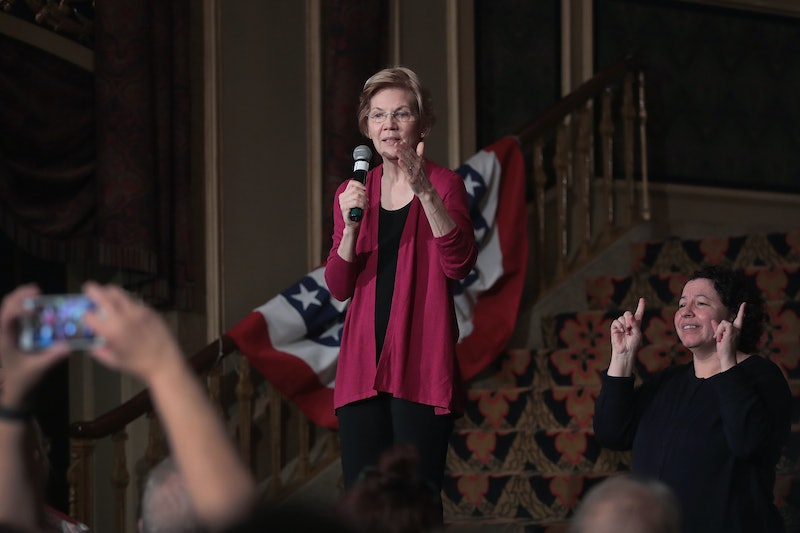 On Dec. 31, Senator Elizabeth Warren of Massachusetts announced she was forming a presidential exploratory committee ahead of the 2020 elections. As campaign season draws nearer, you may be wondering what the difference between a presidential exploratory committee and campaign is — and why candidates differentiate between the two. As it turns out, the distinction between these committees is less clear cut than you'd expect.

Therefore, as Vox noted, candidates who say they are launching an exploratory committee to run for president are essentially also announcing that they're running for president, because they've already made the appropriate legal filing. CNN reported that, while it may seem redundant, it's beneficial for candidates to announce their exploratory committees first and their official candidacy later on, in order to allow them to garner media attention in two separate news cycles.

Indeed, Robert Kelner, a campaign finance expert, emphasized the appeal of making two different candidacy-related announcements to The Hill. "Candidates like to have two bites at the apple,” Kelner asserted. “Later on [after they launch their exploratory committee] they do a big announcement that they’ve decided to run and they get another round of publicity about that.”

While exploratory committee formation and candidacy declaration are essentially the same thing, this typically was not the case prior to 2000, Vox reported. As the news outlet indicated, potential presidential candidates often used to create “testing the waters” committees which were more legally distinct from campaign committee filings and mandated fewer disclosures to the FEC. However, FEC disclosure laws became more stringent in 2000 and, resultantly, the formation of "testing the waters" committees became less popular among candidates, Vox noted.

Following her exploratory committee announcement, it remains to be seen when Warren will officially announce that she is seeking the Democratic nomination for president. However, it's possible this announcement could come quite soon. Another potential 2020 contender, former U.S. Secretary of Housing and Urban Development Julian Castro, has already formed an exploratory committee and, as KSAT News reported, is expected to officially declare his candidacy on Jan. 12. It's certainly possible that Warren could adhere to a similarly rapid timeline after the recent creation of her own exploratory committee.