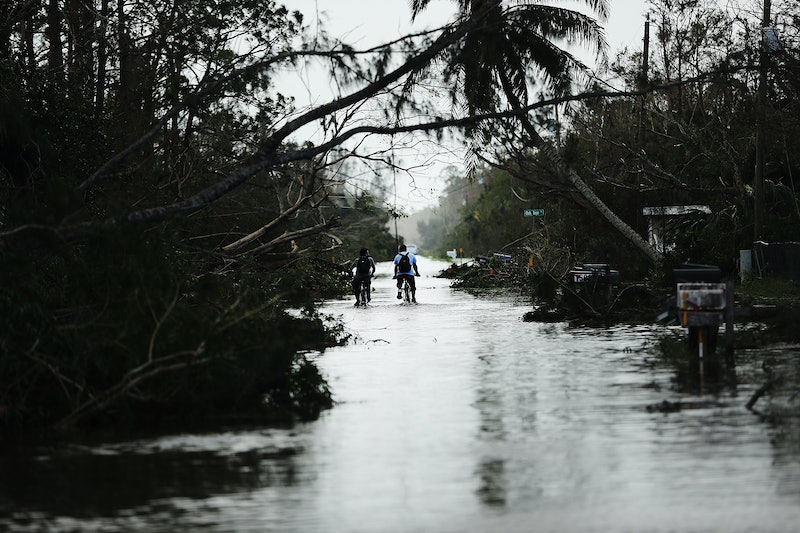 Tropical Storm Dorian is expected to hit Puerto Rico by Wednesday, according to CBS News — and by that time, it might have turned into a hurricane. This might sound confusing if you don't understand the distinctions between the two. In truth, the difference between a hurricane and a tropical storm is nothing more than a single digit.

Per CBS News, the maximum sustained winds recorded for this storm have been around 60 MPH, designating it a tropical storm. Of course, tropical storms can still be extremely dangerous. To put it into perspective, winds of 50-60 MPH are enough to uproot a tree or bring down a power line, according to the National Weather Service.

It's also worth noting that hurricanes and tropical storms are both types of tropical cyclones. Via NASA, tropical cyclones are "non-frontal synoptic scale low-pressure system over tropical or sub-tropical waters with organized [thunderstorm activity] and definite cyclonic surface wind circulation." In other words, hurricanes and tropical storms both have similar structures, in that they both have "eyes" and tend to move in a swirling motion.

These geographic designations are why news about hurricanes is so common in the United States, and you almost never hear about typhoons or cyclones. And according to the Red Cross, typhoons actually tend to be stronger and to take place more frequently than hurricanes, because of the warmer waters in its geographic location.

If you're concerned about the possibility or likelihood of Tropical Storm Dorian hitting the area where you live, the best thing you can do is stay constantly up to date on the storm's whereabouts and strength. The National Hurricane Center offers a number of tracking options for all hurricanes as they come. You can also check out this article about how to prepare for a hurricane, if you're in the storm's path.

More like this
The Best Fans That Blow Cold Air
By Andrea Hannah
The 6 Best UV Umbrellas, According To A Dermatologist
By Rachael Green
The 8 Best Indoor Door Mats For Your Home
By Jenny White
Here’s Your Daily Horoscope For August 8, 2022
By Mecca Woods
Get Even More From Bustle — Sign Up For The Newsletter