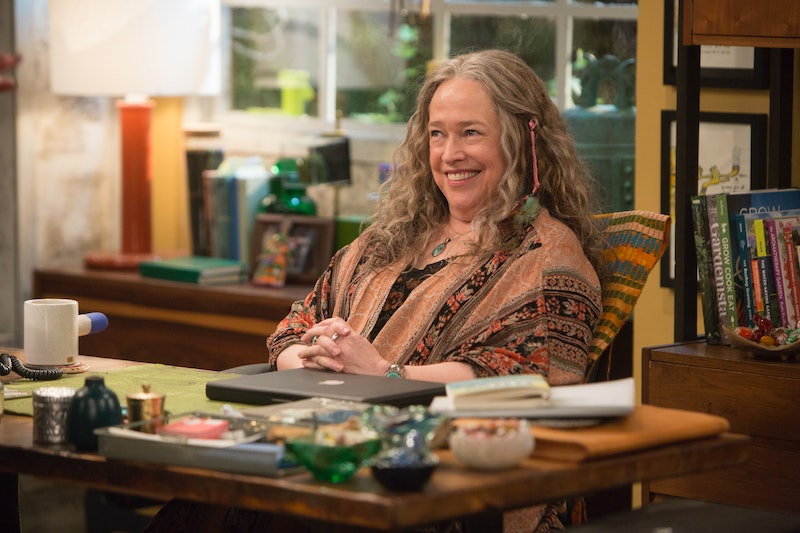 Marijuana might be much more acceptable now than it’s ever been, but it still brings to mind images of ‘60s hippies and ‘70s stoners when you talk about it. Disjointed, the new Chuck Lorre sitcom coming to Netflix on August 25, definitely buys into that a stereotype a little bit — just look at how Kathy Bates’ character Ruth is dressed half the time. But the opening credit sequence actually features a completely different aesthetic: black and white footage with a vintage-seeming blues track over it. What is the Disjointed theme song, and is it actually as old as it sounds?

Believe it or not, the song is completely real — it’s called “Jack, I’m Mellow,” and was recorded by blues singer Trixie Smith all the way back in 1938. And yeah, it has some pretty interesting lyrics:

I'm so high and so dry / I'm sailin' in the sky/ Just smoke some gage, come around babe / Jack, I'm mellow.

You can check out the full version of the song below (although warning, there's nudity in the accompanying video):

Interestingly, this video also contains some of the same footage that appears in the Disjointed credits as well; it reportedly comes from a classic 1936 cult movie called Marijuana: The Weed With Roots From Hell! The credits also feature clips from another 1936 film, Reefer Madness, which is widely regarded as one of the worst films of all time and even spawned a parody musical in 2005.

As the titles of both of these films would suggest, they were designed to be exploitative anti-pot propaganda that taught kids about the evils of marijuana while also titillating adults with salacious imagery. And they weren’t the only ones, too; there was also High On The Range (1929), Assassin of Youth (1937), Devil’s Harvest (1942), and She Shoulda Said No! (1949, all of which depicted pot as a life-ruining narcotic that would lead to more crime, promiscuity, and murder.

At the time, cannabis had been used for medicinal purposes and recreational purposes in the U.S. as early as 1850, but in the 20th century its reputation changed dramatically. In 1930 the first commissioner of the Federal Bureau of Narcotics, Henry Anslinger, championed prohibition by making many unproven claims about the effect of marijuana and scapegoating black people and Latinos (and especially jazz performers) for its popularity. Seven years later, the Marijuana Tax Act effectively criminalized marijuana by only allowing those who paid an exorbitant tax on hemp to carry it. For pot users — particularly pot users of color — it’s been downhill ever since.

While marijuana still isn’t legal in every part of the United States, it’s safe to say that things have changed. The characters in Disjointed still act pretty goofy, but they don’t commit robberies and kill each other like the people in Reefer Madness. Looks like they’ve followed Trixie Smith’s example and have chosen being mellow instead.