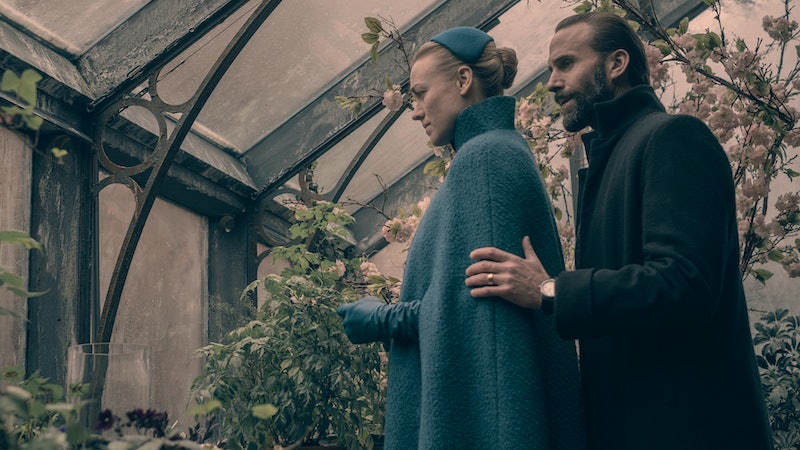 The Handmaid's Tale has always been a narrative about violence against women. But in the show's latest episode, that brutality is taken to a new, even more disturbing level. This week's pregnant rape scene in The Handmaid's Tale proves what Gilead really is beneath its pious acts of faith — that it is a society based on sexual violence, that even handmaids who follow every rule are never safe, and that no one who benefits from a position of power is really on their side. No matter what viewers might think of Serena Joy, she will never be June's ally.

After June goes into false labor, Serena holds her down while Fred rapes her. This has of course happened to June regularly in the past, and it's a disturbing part of being a handmaid that never gets easier to stomach. But this incident is much more violent than the typical "Ceremony," much less procedural, and much more angry. Fred and Serena are furious and impatient over the fact that June hasn't yet given birth, and the attack, so they say, is meant to induce labor.

But from the conversation they have before the act, it's clear Fred and Serena know that what they're doing is wrong. And June fights it — rather than lie back silently until it's done, she struggles and yells at the Waterfords to stop. The ritualistic, almost clinical assaults June regularly endured before her pregnancy have evolved into a more barbaric attack.

The Handmaid's Tale has been criticized for its intense, some say egregious portrayals of violence, and there's validity to those critiques. But there is still something to be said for how the violence against June is depicted here. It's horrifying, gut-wrenching, and difficult to watch June suffer another rape at nine months pregnant, but it drives home how horrific this society is at its core. The scene refuses to let viewers numb themselves.

It may be surprising that any depiction of violence against women on The Handmaid's Tale can still feel shocking, but this assault against June is different than what viewers have witnessed on the show in the past — not only for its brutality, but for the fact that no one involved attempts to justify it. The rape is not doled out under the guise of punishment or spiritual ceremony — it's just chaotic violence, something Gilead, on its surface, claims to try to avoid. Rules and regulations are supposedly the backbone of their society, but June's rape makes it clear that the rules are a facade. For the women of Gilead, any torment is on the table.

The incident also sends Serena past the point of no return, if she wasn't there already. Serena Joy has always been an antagonist, but Season 2 in particular has humanized her. Thanks to Yvonne Strahovski's layered performance, viewers have almost been able to sympathize with Serena's fate as she realizes the world she helped construct is not a world that respects her. She has shared moments of bonding and even compassion with June, and she seemed in recent weeks less like a storybook monster and more like a complicated woman coming to rue the path that led her to her current situation. In the end, perhaps, she may be both.

But regardless of Serena's tears or her objection to June's fate, she consents to it. Instead of painting her as a victim who's as helpless as June is, The Handmaid's Tale illustrates here that Serena knows exactly what she's doing. She does seem to have regrets about what Gilead has become, but she doesn't do anything about them, and that makes her all the more chilling.

At the end of the day, Serena Joy is willing to hold down a woman and watch her own husband rape her. Strahovski gives a masterful performance — the fact that viewers can zigzag between hating her and sympathizing with her is evidence of that — and it's rare to be presented with such a nuanced villain. But this scene may have just delivered the fatal blow to the idea that Serena could ever be redeemed.

Many viewers might consider June's troubling rape to be excessive even by Handmaid's Tale standards, but it also serves as a reminder of the sexual violence that plagues the women of Gilead in its most aggressive forms, no matter how closely they follow the rules, no matter how devout the society claims to be, and no matter how many glimpses of supposed humanity the villains ever show.

More like this
Shonda Rhimes' Net Worth Makes Her One Of The Wealthiest People In TV History
By Hugh McIntyre
'The White Lotus' Season 2 Trailer Teases Multiple Affairs & Another Dead Body
By Bustle Editors
How Much Are The 'Schitt’s Creek' Stars Worth?
By Hugh McIntyre
‘SNL’ Finally Spoofed Nicole Kidman’s Weirdly Beloved AMC Ad & Nailed It
By Stephanie Topacio Long
Get Even More From Bustle — Sign Up For The Newsletter