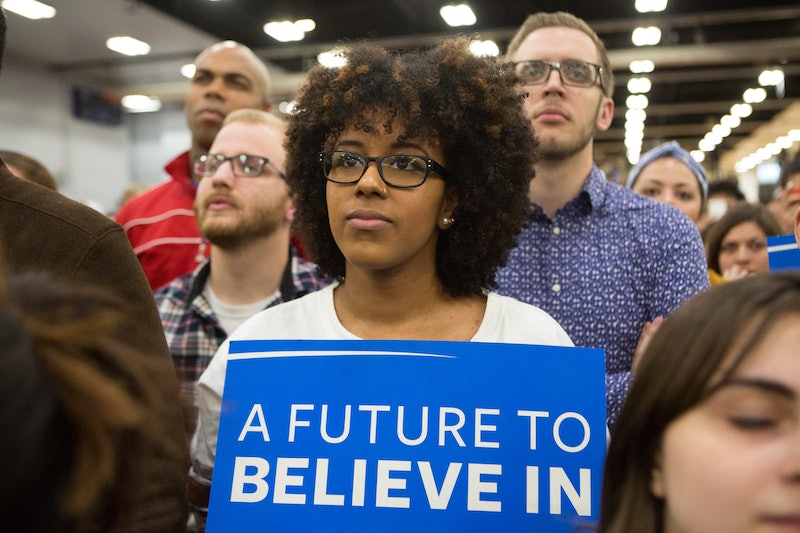 The aftermath of the 2016 election was a low point for the Democratic Party. But instead of wallowing, the Democratic National Committee (DNC) has worked tirelessly to claw itself back into a competitive spot — first for the 2018 midterms, and now for the 2020 presidential election. One important prong of that effort is the DNC's new Organizing Corps 2020, launched on Thursday to train a young generation of diverse campaign organizers in key states across the country.

"We do believe that not only will this have a lasting impact, but it will also help us rebuild our Democratic Party infrastructure, and also just get more people engaged and involved in the party," Sabrina Singh, the DNC's deputy communications director, tells Bustle.

This spring, Organizing Corps 2020 will begin recruiting college juniors in seven states that the DNC believes are key to winning back the White House, with a focus on recruiting young people of color. Students will go through an intensive training course over the summer and then return to their universities, ready to start working to elect whoever becomes the Democratic nominee.

"The Democratic Party believes diversity is our greatest strength," Singh tells Bustle. "We believe that our leaders should reflect the communities that they represent, but also from top down. We need to have the people that are working in communities reflect those communities."

The DNC will work in partnership with the state Democratic Party organizations in Arizona, Florida, Georgia, Michigan, North Carolina, Pennsylvania, and Wisconsin. 270 Strategies, a consulting firm focused on grassroots organizing, and The Collective, a PAC aiming at increasing African-American political representation, will also be involved.

But Organizing Corps 2020 participants won't just be preparing for a potential job on the campaign trail — they'll also learn skills that could help them eventually run for office themselves.

"Organizing Corps 2020 will help propel the young people in the program to make a significant contribution to the Democrats' success in 2020 while preparing them to hold increasing positions of influence as campaign staffers and within the Democratic Party structure," said Stefanie Brown James, co-founder of The Collective, in a press release.

Organizing Corps 2020's leadership team is composed of experienced campaign veterans. The DNC believes this is an important part of the program because it believes that sharing knowledge gleaned from years of hard work will help mold the participants into more adept organizers. It hopes that this, in turn, will build the Democratic Party from the ground up.

The proximate stimulus for this effort, though, is to contribute to the effort to keep President Donald Trump from winning his bid for reelection in 2020.

"In 2016, you definitely saw people who might have felt like they were left behind, or might have felt that they weren't part of the Democratic Party, because they don't see someone that looks like them or someone in their community," Singh tells Bustle. "That's what we're trying to change here."