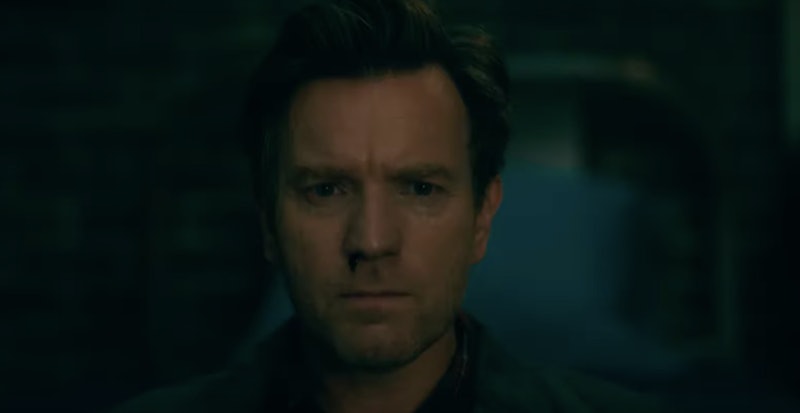 Danny Torrance is all grown-up in the first official Doctor Sleep trailer, and he's more terrified than ever. The sequel to The Shining, starring Ewan MacGregor as a grown-up Danny, shows that he might have more in common with his late dad Jack (Jack Nicholson) than he thought. Let's just say his time spent in The Overlook Hotel still haunts him, as do the cursed words "red rum."

Doctor Sleep, directed by the creator of Netflix's The Haunting Of Hill House, Mike Flanagan and based on the 2003 Stephen King novel of the same name, shows Danny, who after struggling with addiction, just as his father had, is trying to move on with his life. Soon he finds out, though, that he's not the only one with the power to relate to dead people, or as he calls it "the shine." There's a young girl, who like him, has an unexplainable magic, but unlike Danny, she wants answers to why she is the way she is. And to get those, Danny is going to have to make another visit to the Overlook Hotel where his dad lost his mind nearly 40 years ago.

In the new trailer, it's revealed that Danny hasn't used his shine in years, but more recently has again started using this power to comfort those in the nursing home where he works. He himself, though, can't find any comfort in his own surroundings where handwritten messages like "Hello" and "Morning," both of which feature smiley faces in the Os, are popping up everywhere.

It's these messages that seem to lead him to "the kid" who he issues a stern warning to about those powers of hers. "I've only met two or three people like us," Danny says, "they died." Now the question is, can he stay alive long enough to figure out what happened at the Overlook all those years ago? Thanks to this teaser, Danny gets far enough to reenact the most iconic shot from Stanley Kubrick's The Shining in which he peeks his face through the door Jack destroyed with an ax. Here's Danny.

For those Shining heads who want to know much more, Flanagan was kind of enough to give a deep dive into the Doctor Sleep trailer for ComingSoon.net. While there are some familiar-looking shots in this teaser, Flanagan says that "the only scene we used from the Kubrick film was the bloody elevator." The rest, like a young Danny riding through the Overlook, was filmed in an Atlanta studio last year.

For those who loved the 1980 original film should be warned, Doctor Sleep is not a direct sequel. "Doctor Sleep is a sequel to the novel. It’s not a sequel to the Kubrick film," King told Entertainment Weekly in 2013 about his book. "At the end of the Kubrick film, the Overlook is still there. It just kind of freezes. But at the end of the book, it burns down.”

In the film, the Overlook is now a campsite run by a mysterious group called True Knot, who let's imagine won't be all that happy to see Danny. Flanagan told ComingSoon.net, though, that his film will pay homage to both King's book and Kubrick's movie. “Both King and the Kubrick Estate liked the film," he assured fans.

Flanagan also teased that Doctor Sleep could have a happy ending since it's a story about a recovery. “It’s not often you meet the hero of a story when he is puking,” Flanagan joked. No matter what happens to Danny, fans of The Shining are happy to see this next chapter come to life when it hits theaters November 8.