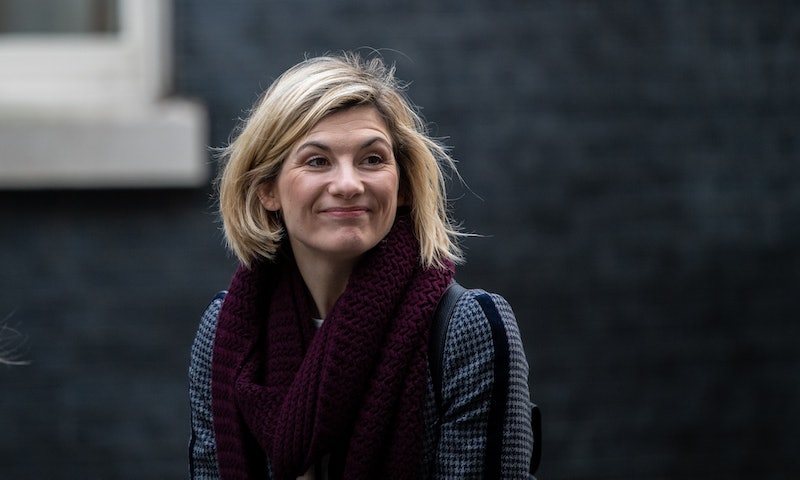 Each generation seems devoted to the Time Lord of their youth — whether that's David Tennant, Jon Pertwee, or Tom Baker — but for me, and imagine my best Ariana Grande voice when I say this: the doc is a woman. That's why when I see any references to Doctor Who, I'll always think of Jodie Whittaker. But besides fighting daleks, she's played other unforgettable roles, just like when she starred in medical thriller Trust Me. If you're a fan of both shows, then I should make you aware that there have been Doctor Who references in Trust Me.

On Tuesday, April 23, Digital Spy spotted that the new series of Trust Me, which debuted on BBC One the week before, featured some infinitesimal references to Doctor Who, as a cheeky nod to Whittaker's departure from the show. According to Hello Magazine, Whittaker allegedly left Trust Me after its series one finale due to scheduling conflicts with the filming of Doctor Who's twelfth season.

As Trust Me's creator Dan Sefton told the Radio Times on April 23, the easter eggs he left behind — like the Doctor Who figurines found by a hospital patient's bedside, as Digital Spy spotted — were left very intentionally.

He told the paper:

"We knew when we were creating it that obviously Jodie had moved on to that role and to do something different. So it sort of just came to me in a flash, and I thought, well, it's kind of fun – it fit with the character [of Danny] – so we have a bit of a nod and a wink to the history of Trust Me. It was kind of deliberate. I was kind of like, this is going to wind a couple of people up. But the little Doctor Who nods do continue a little bit longer, so it becomes part of the plot… it’s how [Jamie] unlocks the iPad and stuff like that. It’s more than just a nod."

For those who missed it, in order to unlock the iPad that Danny left behind for Jamie, he had to punch in the numerical equivalent for "tardis." I reckon you can expect more tiny winks like that in the episodes to come, but so far Sefton's seen a mixed reaction to all the references from fans, as he also revealed to the Radio Times.

“It was interesting, you know, seeing on social media the mixed reactions," he said. "Like when the show actually launched, some people were like, ‘oh great’, some people were like, ‘not my Doctor!’ Which is ridiculous.” That's fair enough, but did someone forget to mention to Sefton that Whovians are actually very, very protective of their own Doctors? Or that bringing up anything Doctor Who related can sometimes be like leaking blood into a tank filled with sharks?

No doubt fans of both shows will be speculating for months to come over what all these Doctor Who references could mean, and that might just be the whole fun of it.