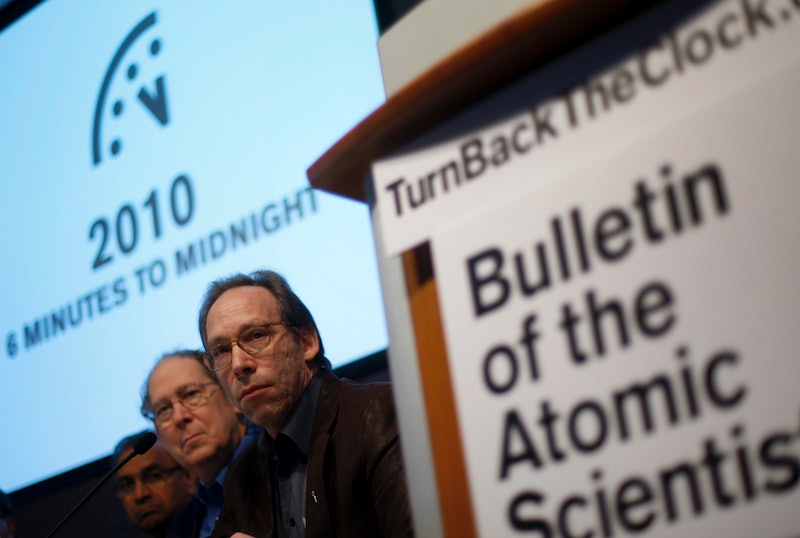 If you were looking for good news, you'd better switch to another article. If you were looking for a terrifying existential threat, stay right where you are. The members of the Science and Security Board of the Bulletin of the Atomic Scientists have just announced that the Doomsday Clock has been moved closer to midnight, and given their reasoning for the tick forward, it kinda seems like Donald Trump has something to do with it.

Well, that's an understatement. The Bulletin of the Atomic Scientists laid out their decision in a New York Times editorial, listing problems like North Korea's developing nuclear program, the shakiness around the Iran deal, the questionable relationship between the United States and Russia, and the major non-nuclear threat facing humanity: climate change.

"These are all matters in which President Trump has signaled that he would make matters worse either because of a mistaken belief that the threats posed by nuclear weapons and climate can be ignored or that the words of a president of the United States do not matter to the rest of the world," wrote Lawrence Krauss, a theoretical physicist at Arizona State University and the chairman of the organization's board of sponsors. If Trump just wants power, then this is an achievement he can celebrate — he's essentially single-handedly moved the Doomsday Clock 30 seconds closer to midnight.

This puts it two and a half minutes until midnight, which is the closest it's been since 1960. The Bulletin of the Atomic Scientists first put it at two minutes to midnight in 1953, the year that both the United States and the Soviet Union tested hydrogen bombs. You might remember that they called that era the Cold War. If you're one to pay attention to the experts, then this announcement would suggest that we're living in an era with similarly dangerous geopolitical concerns.

The Bulletin of the Atomic Scientists originally came out of the Manhattan Project, when a number of scientists involved in building the first nuclear bombs got worried that the work they were doing could actually turn out to have some pretty devastating consequences. They created the Doomsday Clock in 1947 as an easy way to show the public what danger they were facing because of potential nuclear warfare. It may seem like something out of an Austin Powers movie, but it's legit. The scientists involved, all leaders in their fields, explore not only various countries' nuclear capabilities and political stability, but also now the state of the climate.

Now, Trump has stepped into the presidency, said some not-so-nice things about nuclear weapons, and terrified anyone concerned with the environment to their very cores. After all this — plus the other aforementioned sensitive areas — the scientists behind the Doomsday Clock evidently thought that three minutes to midnight did not adequately represent exactly how close the world is to apocalypse.

This sort of puts the whole Alternative National Park Service Twitter account into perspective, doesn't it? Even with an administration that seems determined to ignore science, the science will still be true. There are still some people in powerful positions going in the right direction — like the EU, which is doubling down on its effort to protect the environment. But don't let it stop there; everyone needs to stand up for science, the planet, and, of course, all of humanity — whether it's an organization of atomic scientists, a couple of concerned park rangers, or an English major sitting at her computer, looking up her senator's number.