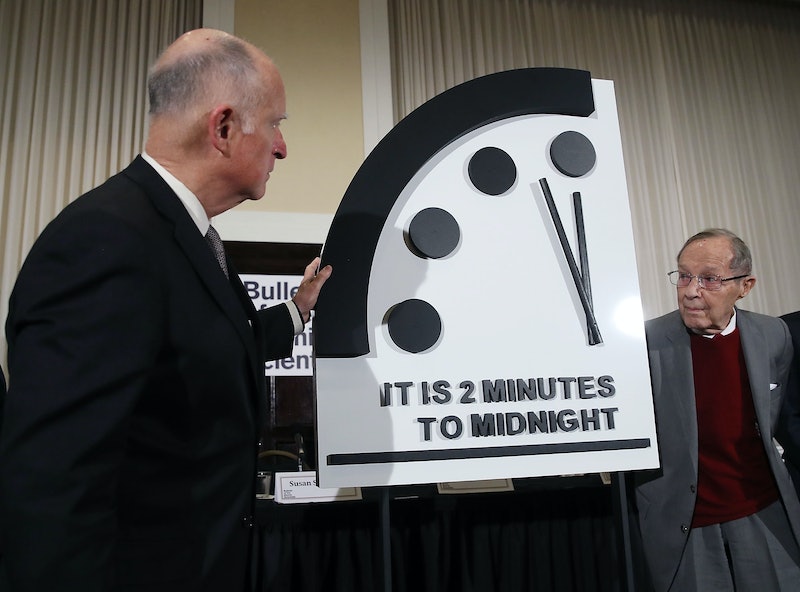 On Thursday, the Bulletin of the Atomic Scientists announced that the Doomsday Clock is stuck at 11:58, meaning that humanity is just two minutes away from the hour of the apocalypse. The "two minutes" part of that warning isn't literal, but the "apocalypse" part is: Members of the Bulletin, in no unclear terms, are talking about the moment that human life ceases to exist — and they say we're as close to that moment as we've ever been.

The Bulletin of Atomic Scientists was formed after World War II by veterans of the Manhattan Project, the secret U.S. program that created the atom bomb. Concerned about nuclear proliferation, members of the organization invented the Doomsday Clock as a way of illustrating just how dire global threats to humanity are at any given point in time; although they initially focused on nuclear weapons, they've since expanded their analysis to include climate change, artificial intelligence, and the spread of disinformation.

Once a year, the Bulletin decides and announces what "time" the Doomsday Clock is currently showing, based on their overall global threat assessment. The closer it is to midnight, the closer humanity is to literal extinction.

The good news, or at least the neutral news, is that the scientists didn't move the Doomsday Clock closer to midnight on Thursday. The bad news is that they didn't move it backward, either, and it was already at 11:58.

At a press conference Thursday, Bulletin President Rachel Bronson explained why the Bulletin decided to keep the Doomsday Clock so perilously close to midnight. The "unacceptably strained" relationship between the United States and Russia, North Korea's continued nuclear development, and rising carbon emissions all contributed to what Bronson called "a state as worrisome as the most dangerous times of the Cold War."

In a statement on its website, the Bulletin cited several moves by President Trump specifically that contributed to the Doomsday Clock's 2019 time. His decision to withdraw from both the Iran nuclear deal and the INF arms treaty with Russia helped steer the world toward "an unregulated nuclear environment — an outcome that could reproduce the intense arms racing that was the hallmark of the early, unregulated decades of the nuclear age," the Bulletin said, while his withdrawal from the Paris Climate Accord was "a dire mistake" that "runs counter to credible science" on global warming.

Bronson also warned of the "changing information ecosystem," calling it a "threat multiplier" that exacerbates existing dangers like nuclear war and global warming. Although she didn't explicitly accuse Trump of spreading misinformation, the Bulletin condemned "national leaders shouting about fake news, by which they mean information they do not like" and, in a separate section, nationalist leaders who "lied shamelessly" on social media in 2019. Both of those descriptions apply to Trump.

"These intentional attempts to distort reality exaggerate social divisions, undermine trust in science, and diminish confidence in elections and democratic institutions," the Bulletin wrote in its statement. "Because these distortions attack the rational discourse required for solving the complex problems facing humanity, cyber-enabled information warfare aggravates other major global dangers—including those posed by nuclear weapons and climate change—as it undermines civilization generally."

The first time the Doomsday Clock hit its current time of 11:58 was in 1953, when the United States and Russia first began testing hydrogen bombs. It has oscillated back and forth since then, falling to 11:43 in 1991, as the Soviet Union was collapsing, before gradually creeping back up to 11:58, which it reached in 2018.