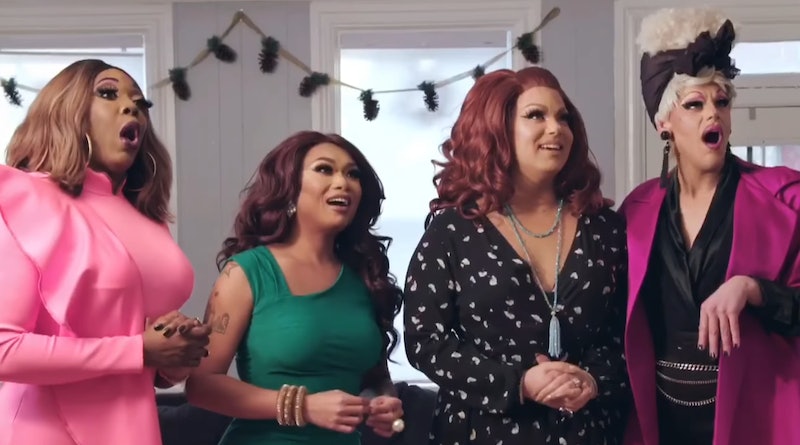 A bride should feel like a princess on her wedding day, and who knows how to turn a regular girl into a princess better than an actual queen? TLC's new special, Drag Me Down the Aisle, puts one bride-to-be in the capable hands of four drag queens who will werk their magic on her special day. The best part is, the queens of Drag Me Down the Aisle are all Rupaul's Drag Race alums that you probably already know: Thorgy Thor, Alexis Michelle, Juju Bee, and Bebe Zahara Benet.

Before reliving the glories of these four fabulous divas, who exactly is the lucky woman they'll be turning into the belle of the ball? Us Weekly describes Drag Me Down the Aisle's star Emily as "an Amish country bride who is most comfortable in a flannel, jeans, and no makeup, but is looking to the queens to guide her in creating the perfect wedding."

An Amish country bride and these huge, show biz sensations doesn't exactly sound like it'd be a match made in heaven. But clearly, Emily signed up for this show for a reason. Maybe big hair and a bigger personality is exactly what she's hoping to get. And whatever happens, with these four involved, you just know it'll be spectacular.

In addition to being one of most famous queens in the NYC drag circut and a former Rupaul Season 8 and All Stars 3 contestant, Thorgy Thor has also worked as a wardrobe stylist and professional violinist and violist, per her website. It's safe to assume that Emily's look will be in safe hands with Thorgy.

Has bride-to-be Emily been dreaming of having the bodice of her wedding dress stoned by hand? Because in that case, she's found just the queen for the job. Us Weekly reports that Rupaul' Season 7 contestant Michelle "has glammed up hundreds of brides and has been dubbed as the 'bride's best friend' by multiple mother[s] of the bride."

Everyone might remember Season 2 and All Stars 1 queen Jujubee for being besties with Raven, but now she'll be palling around with Emily and the other Drag Me Down the Aisle queens. According to Us Weekly, Jujubee has also worked as a professional Mac makeup artist, so she should be able to lend a hand making up Emily for the big day.

It never hurts to have a winner in your corner, so Emily should consider herself lucky to have Bebe Zahara Benet, the very first winner of Rupaul's Drag Race, as part of her expert team. Per her official website, Benet started her own event planning agency, Revel Entertainment, in 2016, which is "known for the scale and grandiosity of its parties." Hopefully Emily is up for a grand affair, because it doesn't seem like "low-key" is in Bebe's vocabulary.

In the Drag Me Down the Aisle trailer, Emily tries on her wedding dress and laments to her fairy dragmothers, "I just don't feel beautiful." Who better than these four to help her see not only her outer beauty, but her inner beauty too?

This article was originally published on March 7, 2019