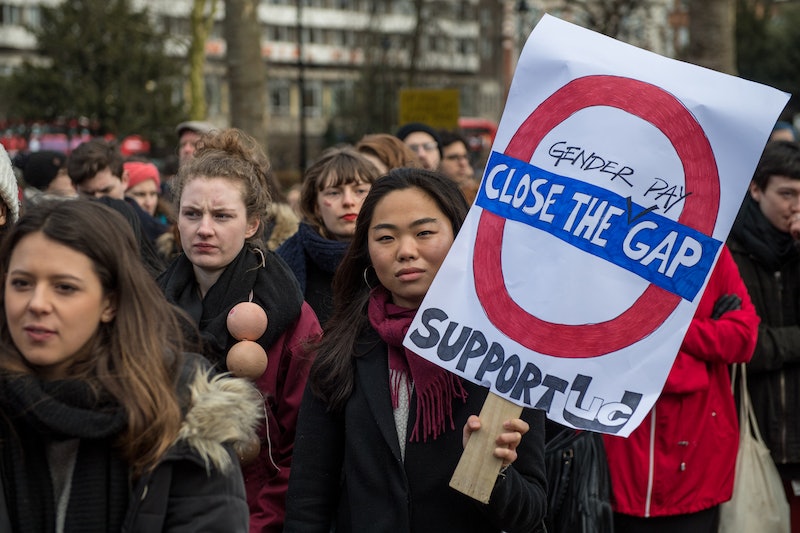 The path toward complete global gender equity could take two centuries, according to a new report out this month. Published by the World Economic Forum (WEF) on Monday, the 2018 Global Gender Gap Report indicates that it could take 202 years to close the global gender economic gap in its totality.

It will take a little more than a century — 108 years — to close the gap as it relates to politics, health, and education, according to a Business Insider analysis of the report. These projections are based on current trends, according to WEF's key findings report. But the economic gender gap, according to the report, could take as many as 202 years, based on the data currently available.

Each of the 149 countries included in the report are ranked and examined based on economic participation and opportunity, educational attainment, health and survival, and political empowerment. The WEF has been running the report annually since 2006.

Over a 10-year period, the report found, the global average earnings for women were almost half of what men made. While men earned $23,000, women earned only $12,000.

“The equal contribution of women and men in this process of deep economic and societal transformation is critical. More than ever, societies cannot afford to lose out on the skills, ideas and perspectives of half of humanity," Klaus Schwab, founder and executive chairman of the World Economic Forum, said of the report, according to the Guardian.

But notably, economic opportunity was the only area which narrowed its gender gap, according to WEF. The WEF report attributed this shift to the 51 percent income gap worldwide, and the 34 percent global gender gap of women who have leadership positions. And while the economic opportunity gender gap shrank in 2018, the report found that there were still significantly fewer women participating in the labor force.

“The economies that will succeed in the Fourth Industrial Revolution will be those that are best able to harness all their available talent. Proactive measures that support gender parity and social inclusion and address historical imbalances are therefore essential for the health of the global economy as well as for the good of society as a whole,” Schwab said in a press release.

Different parts of the world are expected to achieve economic equality at different rates. Western Europe, South Asia, Latin America, and the Caribbean are expected to reach economic gender equity within the next 100 years, according to the report. But East Asia and the Pacific — which ranked last in the projected race to equality — could take an estimated 171 years, and North America — which ranked second-to-last — could take 165 years.

The reasons for the vast gender economic gap are difficult to pin down, precisely. But the report suggested that automation may play a role — namely that automation is taking over jobs typically and traditionally performed by women. In turn, the report found, women are underrepresented in the STEM fields, which are actively expanding. But while there are many causes contributing to vast global gender inequality, what was clear, based on the report, is that the journey toward economic equity, at this rate, is progressing far too slowly.