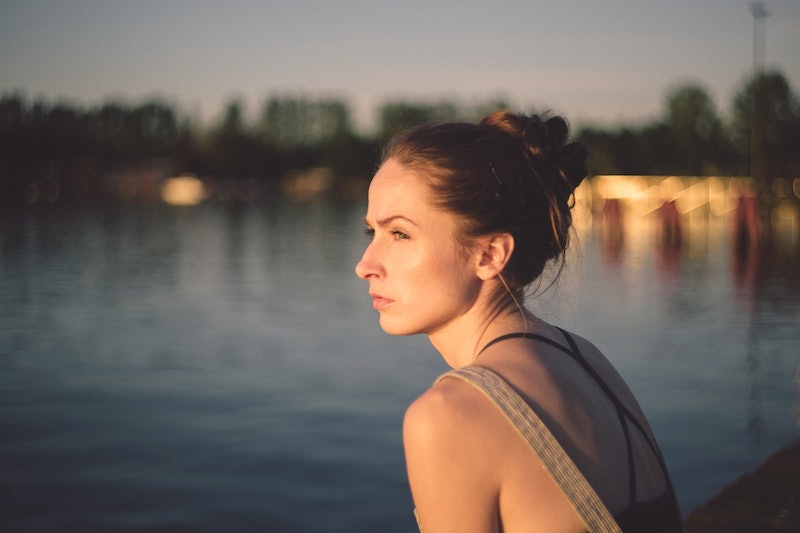 The current White House's plans to dismantle environmental protections put into place by Barack Obama doesn't just threaten our planet's health, or even our own physical health. A new report claims that climate change also affects our mental health in significant ways, which makes the Trump administration's stance on environmental policy even more troubling. The report, released by the American Psychological Association and ecoAmerica, states that "Climate change-induced severe weather, and other natural disasters, have the most immediate effects on mental health in the form of the trauma and shock due to personal injuries, loss of loved ones, damage to or loss of personal property or even the loss of livelihood."

If you've ever lived through a natural disaster, then you know how traumatic it can be. Even if you haven't, the widely publicized aftermath of events like Hurricane Katrina demonstrates just how paralyzing it is to try to rebuild your life after you've lost everything. The report detailed that post-Katrina, suicide and suicidal ideation more than doubled, one in six people met the diagnostic criteria for PTSD, and 49 percent developed an anxiety or mood disorder like depression.

Feeling an impending sense of doom about the future of our planet? If it's making you feel anxious, or even physically ill, you're not the only one. The reports states that stress and anxiety about climate change are linked to physical health effects, such as a weakened immune system. And, worry about actual or potential impacts of climate change can lead to stress that, over time, can result in problems like substance abuse, anxiety, and depression.

Here's what you need to know about how climate change affects your mental health.

1. Climate Change Is Real & Affects Everyone

We know climate change is real, because science. This makes the Trump administration's climate change gaslighting tactics feel like a personal betrayal to every human, plant, and animal they are disregarding by undoing policies that could help protect us.

Even if you are not directly in the path of an impending disaster, co-author of the report Susan Clayton, who is also psychology professor at the College of Wooster in Ohio, said in an article on WebMD that you could still suffer psychological effects. "[It's] a far more widespread threat to our well-being through direct and indirect impacts on mental health," Clayton said.

According to the report, the psychological responses to climate change, like conflict avoidance, fatalism, fear, helplessness, and resignation are growing among Americans.

"These responses are keeping us, and our nation, from properly addressing the core causes of and solutions for our changing climate, and from building and supporting psychological resiliency," the report states.

2. Certain Communities Are At Greater Risk

Natural disasters aren't the only way climate change can affect your mental health. According to the report, communities in which people’s livelihoods are directly tied to the natural environment, through agriculture, fishing, or tourism, are at greater risk for developing mental health issues. And, communities that don't have sufficient physical or financial resources can experience higher percentages of severe mental distress.

There is a coastal community in Maine called Camp Ellis where houses regularly fall into the ocean (I'm not kidding) due to erosion caused by a jetty. When I was a reporter there, I walked with residents on the beach after storms as they surveyed their destroyed homes, some of which were literally broken in half like dollhouses and strewn along the shore.

In order to maintain flood insurance, residents must elevate their homes a number of feet that is determined by FEMA, and cities can add additional feet to the number. For low-income residents who live in an area like this, the constant stress of making sue their homes meet FEMA flood-map regulations can be a constant financial and emotional burden. Additionally, people who live in high-risk areas might see their property values diminish, making it difficult to relocate.

"Any of the interlinked problems within climate change — poverty, inequality, loss of treasured places, species extinction, threats to our well-being or livelihood — can hook us emotionally and intellectually," Portland, Ore.-based Psychologist Thomas Doherty, said in the report. "These issues lead to feelings of curiosity and insight, as well as fatigue and despair."

3. It Can Elevate Hostility In Communities

The stress of climate change has been shown to elevate hostility and aggression, and contribute to the loss of social identity, according to the report. This means people could start turning against each other when they need each other most.

For instance, a recent study of survey respondents displayed more negative attitudes toward policies to support minorities and immigrants when temperatures were high, according to the report.

And, an experimental study showed that "people who were thinking about climate change became more hostile to individuals outside their social group (that is, people they consider to be unlike them) and more likely to support the status quo and its accompanying social inequities."

Maintaining strong, supportive social networks can help people build resilience, the report suggests, so instead of isolating yourself, reach out to friends and family instead.

"Individuals’ personal capacity to withstand trauma is increased when they are connected to their networks off- and online,” the report states. “Researchers have found that higher levels of social support during and in the aftermath of a disaster are associated with lower rates of psychological distress.”

The report contains tips to help with resilience building that include: Bolstering belief in your own resilience; fostering optimism; cultivating active coping and self-regulation skills; finding a source of personal meaning; maintaining connections to your culture; making sure you are prepared for a disaster; and staying connected to parents, family, and other role models.

While it might seem like the odds are stacked against us, we can't give up. Let's support each other while also taking active steps to support the environment, because we only have one Earth, and she needs us now more than ever.

More like this
I'm Going Off My Bipolar Meds to Try to Get Pregnant
By Anonymous, as told to Anna Goldfarb
How To Fight For Reproductive Rights, Based On How Much Time You Have
By Courtney Young
5 Crystals For Anxiety
By Megan McCarty
5 Crystals To Manifest Better Sleep
By Megan McCarty
Get Even More From Bustle — Sign Up For The Newsletter