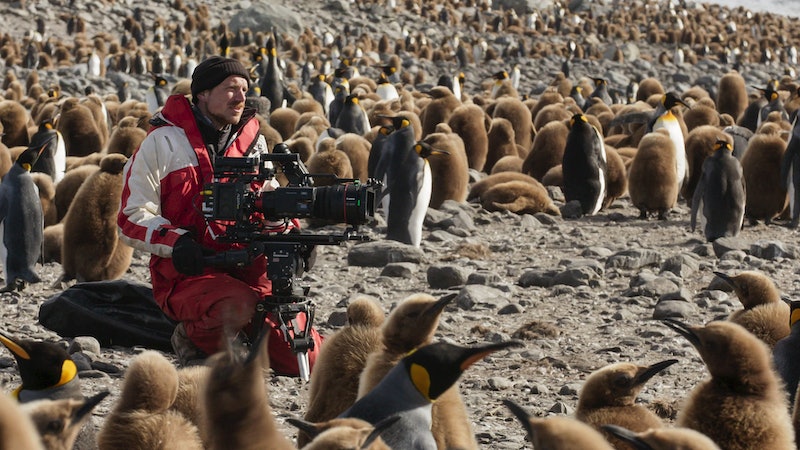 "For me, it's emotional because I know this might have been a once in a lifetime experience ... I just hope we can keep these places and protect them." These were the emotional words of Seven Worlds, One Planet cameraman Rolf Steinmann. The first instalment of the David Attenborough-narrated docuseries hit TV screens on Oct. 27 with a look at the impact of climate change on several Antarctica-based species, and Steinmann's teary demeanour hit viewers hard.

An equally emotional flurry of tweets ensued as soon as the German wildlife cameraman uttered the final blow. (This was coupled with tears from the storylines involving dying seal pups, penguin massacres, and melting ice caps.) Gifs of people crying were shared; others proclaimed their adoration for Steinmann. But his message was clear: this environmental impact cannot continue.

He was specifically referencing the population and living conditions of wildlife including Gentoo and king penguins, the grey-haired albatross, and Weddell seals. But speaking amid a backdrop of penguins, it is these cute creatures that many are focusing on. And with good reason.

Although Gentoo penguins are considered to be pretty adaptable to change, per Scientific American, the breed is not widely dispersed, potentially meaning it will struggle to adapt if its home is lost. "Because Gentoo Penguins seem to have such a low rate of dispersal between island archipelagos, each of the archipelagos we looked at harboured unique genetic diversity that would be lost for good if the population were to go extinct," Dr. Gemma Clucas, author of a 2018 penguin study, told conservation group BirdLife International.

Similarly, king penguin populations may soon be in a critical position, per the Guardian. A study, published in Nature Climate Change, found that global warming could eliminate 70% of king penguins or push them to find new breeding grounds. In Seven Worlds, One Planet, Attenborough notes that parts of the Antarctic "are warming five times faster than the rest of the world."

Steinmann — who has also worked on prior BBC series such as Dynasties and Planet Earth II — is likely to have seen these effects throughout his career. As well as working for the likes of the BBC and National Geographic, he has also used his expertise in remote locations and extreme climates to fund and create his own short film. In Between, released in 2015, focuses on the lives of wild musk oxen.

“In my opinion, you are always learning a lot about another species if you spend weeks with it," he told Australian culture site Lost At E Minor. "It’s like with a human. After a six-week camping trip, you know much more about your colleague or friend (and that he might not be your friend anymore)."

On Instagram, he opened up further about the filming process for Seven Worlds, One Planet, touching on that fetching red suit. "After two weeks," he said, "I couldn't wear that red suit anymore." Why? Because it "stank so bitterly" of elephant seal faeces and urine. "I wasn't able to handle it," Steinmann finished, "not to mention the crew."

Catch Seven Worlds, One Planet on BBC One on Sundays at 6:15 p.m.