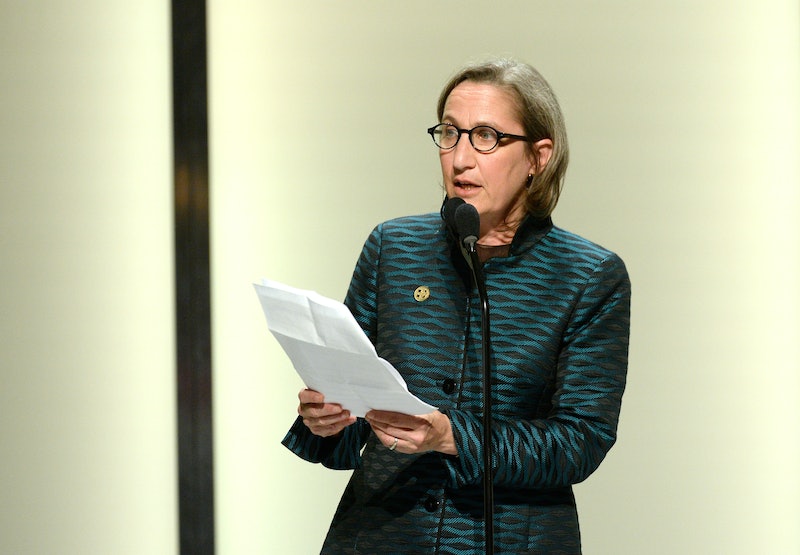 Earlier this year, Stanford law professor Michele Dauber helped facilitate the recall of California Judge Aaron Persky, who sentenced Brock Turner to six months in jail for sexual assault. Such recall initiatives seldom find such support, making that success all the more monumental — and now Dauber is channeling that energy into a PAC that targets political candidates accused of sexual misconduct, misogyny, and generally working against women's interests.

"Women are saying no abusers in office, no abusers on the Supreme Court, no abusers in the state legislature," Dauber told The New York Times. "Those who enable them, who apologize for them, who excuse them can also be targeted."

The organization, dubbed the Enough is Enough Voter Project, says on its website that it aims to "hold politicians accountable and ensure violence against women is part of the national conversation this November and in future elections." In a video promoting the project, Dauber said, "Aaron Persky isn't the only elected official who doesn't take violence against women seriously." She continued:

He's one of many. It's time for that to change. Enough is enough. We're mobilizing women and our allies all across the United States to investigate and to defeat candidates who have turned against women on issues of sexual harassment and violence against women... These people have no place in public life. We're saying enough is enough by standing up to bullies at the ballot box. We will vote them out.

Currently, all of the candidates Enough is Enough is targeting are Republicans, though the organization has told media outlets that it is open to zeroing-in on Democratic candidates as well. "Democrats who engage in this behavior should not think they are safe from being targeted," Dauber told the Times, explaining that the group intends to stay active through the 2020 election.

The political campaigns currently targeted by the group are both national and local. There are candidates for U.S. Congress, as well as for various state legislatures. The accusations against those listed are also wide-ranging, from allegations of sexually assaulting minors to domestic abuse. Also included are elected officials who have a voting record deemed problematic, such as Texas state Representative Matt Rinaldi, who voted against extending the statute of limitations for rape victims.

The group's efforts directly build on Dauber's fight to see Persky recalled. In June of 2016, Judge Persky sentenced Brock Turner, who convicted of sexually assaulting an unconscious woman behind a dumpster, to six months in prison. Critics were outraged, characterizing the sentence as unreasonably light, given the nature of the crime. Turner's conviction could feasibly have carried a 14-year prison sentence.

The sentencing was compounded by a statement released by Turner's father, Dan Turner. In the statement, Dan contended that his son shouldn't endure a major punishment for "20 minutes of action."

Following a concerted campaign against the sentencing judge, voters took action. Ultimately, the "Recall Persky" campaign was successful, and Persky became the first California judge to be recalled since 1932, according to the San Francisco Chronicle.

Whether Enough is Enough will also find success will not be clear until the November elections. For now, they're working on picking up steam.