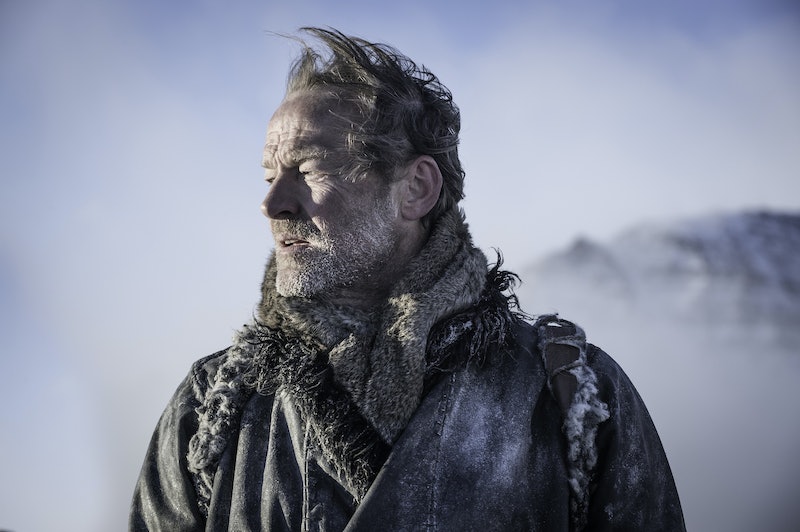 By repeating the warning "winter is coming" over and over again since Game of Thrones premiered in 2011, the HBO hit series has always given the impression that it was leading up to an epic culmination of events. There's a lot riding on the upcoming eighth and final season of GOT, so secrecy has been paramount. Finding any kind of spoiler is not an easy feat. But according to Iain Glen, who plays Ser Jorah Mormont, the whole cast of Game of Thrones knows how the series will end — at least, the whole cast involved in the finale does. Glen broke the news while speaking to IndieWire at the Television Critics Association press tour this week, and it might mean that GOT fans have even more opportunities to catch the sought after spoilers than they'd ever thought before.

While talking with IndieWire, Glen stayed tight-lipped about Season 8, aside from praising it a little. The actor said, "I was in awe at the writing finesse, that it just realized everything in a very fulfilled way. I thought it was brilliant, yet beautiful." And, yes, he has read the finale.

Considering that after filming Season 7, Emilia Clarke told the Los Angeles Daily News that the show's ending was "a secret from the cast," the entire cast's knowledge of Season 8's ending seems like a big risk for the HBO series' creators to take. After all, during that same interview with LA Daily News, Clarke said that the showrunners avoided telling the cast about the ending because, "We generally can’t be trusted. They pretty much have told us so."

As Glen explained to IndieWire, it was necessary for all cast members to understand the direction that Season 8 will go, even if they don't have a big part in the final episodes. Otherwise, actors wouldn't get a chance to fully understand their role. "The knowledge you gain about the story, the telling, and the themes that are involved … you piece your little journey into that,” Glen said. So when GOT Season 8 finally premieres on April 14, you might want to look extra closely at all the actors for any clues of how the show will end. Any grimace or foreshadowing will be fair game for clue-hunting.

Of course, everyone always knew that at least a few of the key GOT players would find out about what would really happen when it all ends. Those actors would likely include Kit Harington (Jon Snow), Clarke (Daenerys Targaryen), Lena Headey (Cersei Lannister), and Peter Dinklage (Tyrion Lannister), all of whom will hopefully remain alive to the very end.

The last time that Clarke spoke about the show's ending was last May when she told The Hollywood Reporter, "I think they're filming a bunch of stuff and they're not telling us. I'm being serious. I'm being deadly serious." But Harington, on the other hand, recently told U.K. radio station KISS FM that he spoiled the show's ending for wife, GOT alum Rose Leslie, last year. "I told my wife last year how it ended, and she wouldn’t talk to me for about three days," Harington said, as confirmed by Entertainment Weekly. So, he definitely knows.

So, the next time you see a Game of Thrones cast member, feel free to ask them about the finale. Odds are, they know all the secrets!