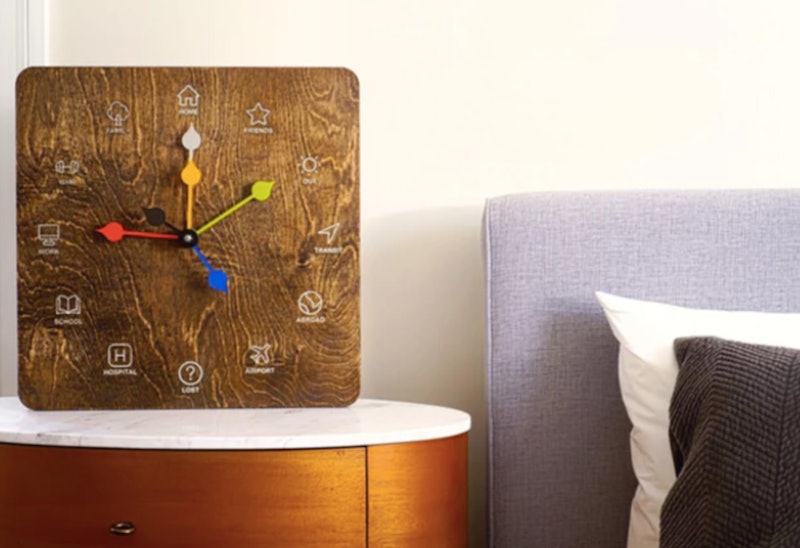 Perhaps one of the most practical devices in the Harry Potter universe — besides, obviously, Hermione's magical, bottomless handbag — is Mrs. Weasley's family clock. The clock had a hand for all nine Weasleys, and instead of telling time, it showed where every member of the family was at any given moment, like school, work, the dentist, or mortal peril. Now it seems the magical clock could be a reality for us Muggles as well, thanks to the Eta clock.

Developed by two M.I.T. engineers, the Eta clock (pronounced "eh-ta," not "E.T.A." as I kept saying in my head initially) is a "community location device" which allows you to see where the most important people in your life are throughout the day.

"Our families live all across the country, and we wanted a way to give them peace of mind without having to sacrifice our privacy," explained Kristie and Eric D'Ambrosio-Correll, the product's husband and wife co-founders.

The Eta clock works in conjunction with a mobile app. After your select group of friends and family downloads the app, they can input their most frequented locations, like work, home, or the gym. Once their profile is set up, the app broadcasts their location to the company's secure server, which sends the info to your Eta clock.

But what if you, like me, aren't wild about the idea of someone knowing where you are all the time? Fortunately, there are no icons for "sobbing in the changing room of a major department store because trying on jeans is a soul-crushing experience" or "getting coffee near your ex's place because you want them to see how good you look today." And, if you don't want to share your home or workplace location for whatever reason, you can adjust your privacy levels to determine what information gets sent back to the Eta clock.

So far, the Eta clock has already surpassed its goal of raising $30,000 on Kickstarter, and if you want to get a deal before the product launches, you'll have to act fast. Currently, people can get an Eta Clock MINI by pledging $250 to the campaign, or a standard Eta Clock for $400, which will retail for $350 and $500 respectively. (You can also get a set of four coaster for pledging $50, which seems like a rather expensive set of coasters.)

The D'Ambrosio-Corrells are not the first people to create an IRL version of Molly Weasley's clock. In February 2016, Reddit user tbornottb created his own family clock by outfitting an antique clock with LED lights connected to the "If This, Then That" app, which transmitted his friends and family's locations back to the clock. It is all extremely technical, and I don't fully understand it, but for those of you with strong technical skills, read tbornottb's breakdown of his process here.

As impressive as tbnornottb's device was, however, the D'Ambrosio-Corrells are the first to make a version you can buy for your own home. But you'll have to be patient. Eta clock's Kickstarter campaign ends on October 21st, after which the company will begin collecting order and shipping information, and finalizing their production and design, and they don't expect to begin shipping clocks to their first backers until July 2018.

Until then, you can just do what I do, and text your friends and family a series of three urgent question marks at regular intervals throughout the day.

More like this
What Is A “Softboy?” The TikTok Term & Aesthetic, Explained
By Courtney Young
Why Are TikTokers Slapping Each Other With Tortillas?
By Courtney Young
Here’s Why Everyone On TikTok Is Getting “Krissed”
By Courtney Young
This Viral TikTok Trend is Exposing Everyday Scams
By Sophia Moore
Get Even More From Bustle — Sign Up For The Newsletter