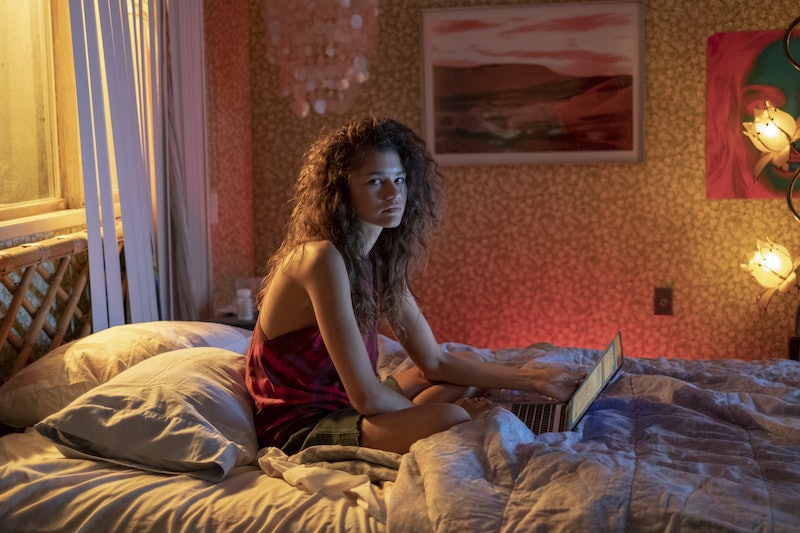 Since HBO's new teen drama, Euphoria, is produced by Drake, you'd expect nothing less than a stellar soundtrack. The show stars Zendaya, Maude Apatow, Sydney Sweeney, and a number of other young stars. And while the series is about a group of teenagers struggling to cope with drugs, sex, alcohol, and mental health, the Euphoria soundtrack isn't quite as dark and offers plenty of recognizable songs.

According to Euphoria's Twitter account, the show was scored by Labrinth, a British singer, songwriter, and producer who's previously collaborated with Sia, Ed Sheeran, and Rihanna, among others. As for the show's soundtrack, Candace Meade is credited on IMDb as the music coordinator, while Jen Malone and Mary Ramos serve as supervisors. And since Euphoria's episodes will be released in weekly, HBO announced via Twitter that the series playlist would be released weekly, too, after each episode airs.

The premiere episode featured recognizable names as well as up-and-comers including Yung Baby Tate, Rockstar Jt, and producer Stratus. Also included are some oldies, such as "Snowflake" by Jim Reeves, "Can't Get Used to Losing You" by Andy Williams (which is the hook used in "Hold Up"), and "Brighter Tomorrow" by various artists. Here are some of the biggest hits so far, with more assuredly to come in the following weeks.

"Hold Up" by Beyoncé

Need we say more? The Queen Bey herself opens the Episode 1 playlist with Lemonade's "Hold Up."

This Houston-based rapper has been blowing up recently, with hits like "Big Ole Freak," "Cash Sh*t," and "Freak Nasty." Euphoria opted for "Cocky AF" from her 2018 album, Tina Snow.

"Narcos," from Migos' 2018 album Culture II, fits right in on the Euphoria soundtrack — and it makes sense that Drake included them, since he collaborated on their 2018 track "Walk It Talk It."

"Future and I have a lot in common — we're mutual fans of each other's work and we both love the grind of getting a lot of work done," A$AP Rocky told Noisey back in 2016. The same could be said for Future and Drake, who released a collaborative album, What A Time To Be Alive, in 2015.

This upbeat track from English music producer Jamie xx (who is also a member of the indie band The xx) features Young Thug and the Jamaican singer Popcaan (who's signed to Drake's OVO label). Jamie told the Fader that he started writing the song with a sample from Street Corner Symphony — an album from The Persuasions. "It's an a cappella record where they are doing barbershop-style backing, and there's a beautiful soul song over the top," he explained. Jamie added that Young Thug and Popcaan both recorded versions of the song, which the producer combined "because their voices work really well together."

Thankfully, the first installment of Euphoria's soundtrack is streaming on Spotify, with more added each week. Hopefully Drake will show up at some point — or perhaps even a collaboration with Zendaya.