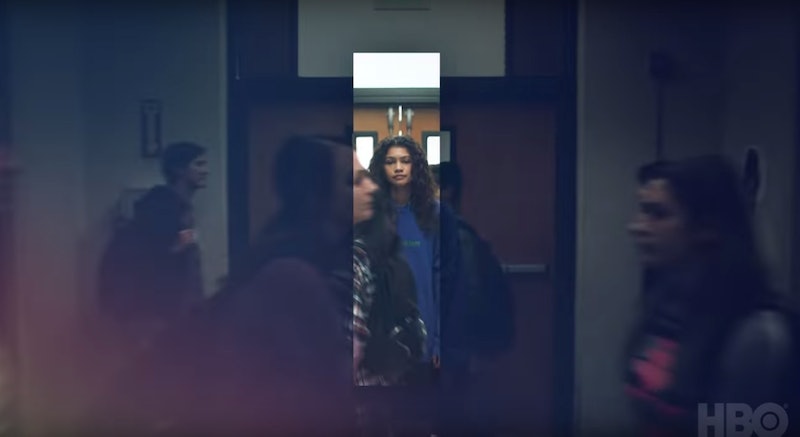 Could Riverdale finally have some competition? The trailer for Zendaya's Euphoria is here, and the teen show looks like it will be filled with plenty of drama. There aren't a ton of details about the show just yet, but it sounds like it will hold its own among the more out-there teen shows.

Zendaya's character, Rue, is a teen drug addict, according to Vulture. The trailer features shots of her staring confusedly into the camera, embracing another teen in bed, and showing off a tie-dye T-shirt with an alien playing soccer. (It's a lot to take in.) "This is the feeling I've been searching for my entire life," Rue says in the clip.

The Spider-Man: Homecoming actor isn't the only big-name star in the upcoming series, either. The Kissing Booth actor Jacob Elordi and A Wrinkle in Time star Storm Reid will also be in the show, as will Sydney Sweeney, Maude Apatow, Algee Smith, Alexa Demie, Barbie Ferreira, and Hunter Schafer. Plus, there's an A-lister behind the scenes, too: Drake will be an executive producer on the new show, which is set to premiere later this year.

And while the Euphoria trailer might looks different from any teen show you've seen before, it's actually not a completely original concept. The HBO series is an adaptation of an Israeli show, also called Euphoria, which aired from 2012 to 2013.

A press release from HBO says that Euphoria "follows a group of high school students as they navigate drugs, sex, identity, trauma, social media, love, and friendship." It sounds like the show won't be shying away from some pretty tough topics, especially if Rue is battling addiction.

The teaser trailer is just 34 seconds long, but it hints at plenty of drama. Based on the subject matter, and the artsy style the clip is shot in, it looks like Euphoria could join shows like Riverdale, 13 Reasons Why, and Elite, as teen dramas that appeal as much to adults as they do to teens.

Some Twitter users are already comparing the new series to existing teen shows. One person, @KessoDiallo12, expressed hope that Euphoria will "show mental illness" in a different way than 13 Reasons Why did.

Another person pointed out that having Drake involved behind the scenes of Euphoria also invites 13 Reasons Why comparisons, since Selena Gomez is an executive producer of the Netflix series.

Zendaya talked a little about Euphoria during an interview with Vanity Fair published last month, and it's clear she's excited to take on a role that's so different from the other characters she's played. She told the magazine,

"To me, Euphoria is one of the most raw, honest looks at what it looks like now to be a young person. It's definitely different than what I've ever done before, and there are going to be some themes that are tougher to deal with. But at the end of the day, it's somebody's reality, and that's the story we're telling."

Zendaya makes a great point. Not all viewers, say, might have gone through struggles with addiction. But many young people do deal with similar issues, and it can be helpful to see those experiences on screen. Her thoughtful statement is encouraging for the show's future, and it sounds like the new series will be a must-watch.