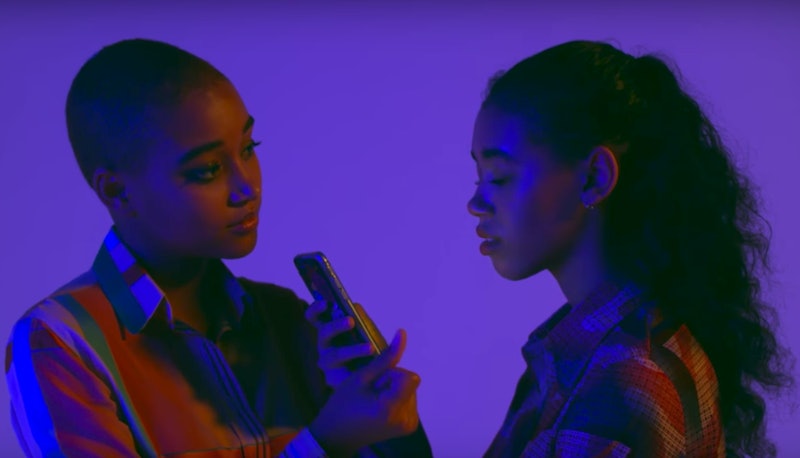 The moment I heard the tender, soulful sounds of BADBADNOTGOOD on the soundtrack for Everything, Everything, I knew love was the centerpiece to this neo-vintage tracklist. The movie, out on May 19, is about a young girl who lives a sheltered life because of a rare condition that prevents her from going outside, and when she meets the boy who just moves in next door, she's enthralled by his sense of adventure — which is why it's so suitable that the Everything, Everything soundtrack will take listeners back to their first kisses. Remember those? Unplanned, untethered, and wildly romantic, or at least wildly awkward.

The movie's soundtrack is stylistically varied, but all the songs will give you the butterflies, the palm sweat — all of that good stuff that happens when you slip into your feelings. The tracklist includes some of my favorite artists like Khalid, Anderson .Paak, and The Internet, not to mention the release of star Amandla Stenberg's 'Let My Baby Stay', a cheeky but minimal spin on Mac DeMarco's 2014 Salad Days version. Check it out, and prepare to be taken back to your hormone-filled youth.

The album is set to be released May 17, serenading the earbuds of lovers before the movie's release. Here's the official tracklist:

If you've been waiting for a soundtrack that can carry its melodic wit throughout the entirety of the album, this one may be it. After seeing the movie, you'll want nothing more than to settle in on the couch and listen to these tracks, transporting yourself back to the days of new love and first kisses.

More like this
Everything You Need To Know About ‘Black Panther: Wakanda Forever’
By Bustle Editors and Radhika Menon
At 28, Lesley Manville Was Acting, Picketing, & Singing Kate Bush Songs
By Olivia-Anne Cleary
Reese Witherspoon Gave Fans Hope For 'Legally Blonde 3' After This Surprising Movie Inspired Her
By Jake Viswanath
22 Movies On Netflix That Are Perfect For The Whole Family
By Bustle Editors
Get Even More From Bustle — Sign Up For The Newsletter