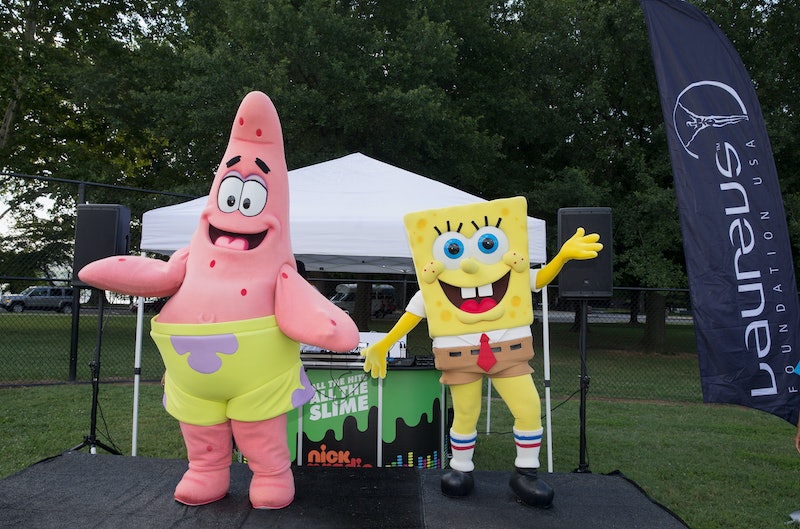 Move over, #NFID18, because there's a new hashtag in town. It's the #ExplainTVShowsBadly hashtag on Twitter, and it's here to change your perspective on TV 140 characters at a time. What's most fun about the trending #ExplainTVShowsBadly hashtag is the creativity Twitter brought to it. Participants used a liberal interpretation of "badly", which meant they took an interesting approach of explaining a popular show — but, just as often, it led to a beloved series described through an entirely new lens. To scroll through the hashtag is like having your friend describe her new favorite TV show after she's had two cocktails, or asking the same of your mom pretty much ever. From kids' shows to '80s prime time TV, the result of #ExplainTVShowsBadly is a gleeful mash.

It's still happening, so feel free to jump in with your own brief description of television. Or, just sit back, relax, and scroll through dozens of Tweets that may or may not change the way you look at binge-worthy TV. Whether you think they sound so much better or impossibly worse, there's no denying that the #ExplainTVShowsBadly hashtag on Twitter makes your favorite TV shows sound hilariously different. One thing is for sure: You won't watch Sesame Street the same way again.

When A Long-Running CW Show Gets A Makeover

Like, yeah, Supernatural is spooky fun, but we'd absolutely watch that version of it, too.

Please let this be in development at NBC. Friday nights, maybe at 8 p.m.? Call us.

This Could Describe Literally Every Crime Show

To be fair, this is a pretty accurate description of every Law & Order episode. And all of their spinoffs. This is basically just Law & Order. It's not even a bad job of explaining it.

When Children's Shows Get Dark

If Internet memes didn't kind of ruin SpongeBob SquarePants for you, maybe this nihilistic view of Bikini Bottom will.

'Sesame Street' Was Educational Until #ExplainTVShowsBadly

Oh, okay, come on! This is a program for children.

When 'Spider-Man' Gets Weird

Justice for Peter Parker, fam. He didn't ask to be a superhero!

This is Jeopardy! It's weird; we never noticed Alex Trebek's love of overpronouncing until now. Hopefully, this doesn't change anything.

Uh, yeah. But, if you haven't watched it, a lot of other things happen too. How I Met Your Mother is actually really sweet! If you don't think about it like that.

Honestly, Alyssa Milano's Twitter is a joy every day. Of all of the TV shows she could have referenced, she went with Who's The Boss?, and we love her for it.

Remember When Patton Oswalt Was On 'The King Of Queens'?

Well, when you put it that way, Topanga, what was even happening on Boy Meets World?

#ExplainTVShowsBadly will definitely change the way we watch the best TV shows out there. Some of the hashtag's entries are so perfectly vague, it's hard to even tell what they're explaining. Some have put a spin on '90s can't-miss TV that will definitely alter how we watch late-night reruns.

The #ExplainTVShowsBadly hashtag is still going strong. If you need a break from bingeing, but don't really want to leave your TV behind, we heartily recommend a scroll. If you think of any hilariously weird ways to condense a classic series into 140 characters, you can definitely jump in on Twitter.

More like this
Jesse Tyler Ferguson Had A Funny Run-In With A Fellow ‘Modern Family’ Alum
By Grace Wehniainen
“The Door Is Always Open” For Another 'Breaking Bad' Spin-Off, Says AMC Boss
By El Hunt
'The Undeclared War' Took Inspiration From This Gavin & Stacey Location
By Maxine Harrison
'The Undeclared War' Is A Must-Watch For 'Black Mirror' Fans
By Maxine Harrison
Get Even More From Bustle — Sign Up For The Newsletter