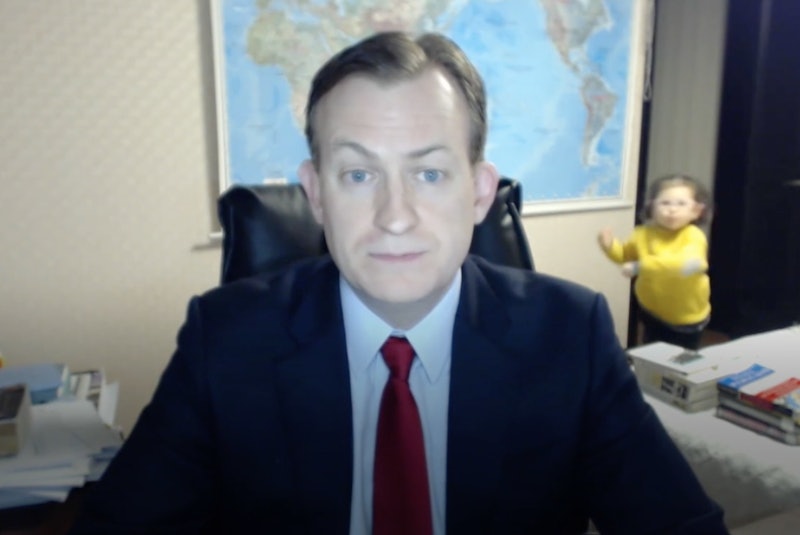 Mother internet often provides delicious moments of joy but some in particular stand head and shoulders above the rest. In times of yore, news bloopers might have gone unchecked, and not spread among the masses, but not anymore. And one of the most well-known news bloopers has just had a "where are they now?" update with Professor Robert Kelly, the dad from the viral video of his daughter interrupting a Skype interview, and his family appearing on BBC News once again.

It was back in 2017 that Robert was interrupted during a live BBC News interview about South Korean politics. As we all know by now, during the interview, his toddler Marion came in, dancing merrily away, followed shortly by her mother Jung-a Kim and her baby brother James, who rolled in on his walker. Robert maintained his composure, although he did crack a smile when Jung-a Kim effectively threw herself onto the floor and dragged the children out of the room.

The video quickly went viral, became a meme, and was the perfect depiction of what parents who work from home experience on a day to day basis. The Kelly family became so well known across the globe, in fact, that Robert told the Guardian Marion's nursery decided to get a security guard in because they were concerned that "weirdos would show up."

So, why are they back in the news today?

Well, as NBC reports, South Korea has been praised globally for their apparent success in "flattening the curve" via widespread testing and social isolation. With this in mind, the BBC decided to invite the Kelly family back on to talk about what's happening in their country of residence. In the Kelly family update from their home (and, it appears, in the very same room where the now-famous first interview occurred) Robert and Jung-a Kim gave their advice on keeping the wee ones entertained during social isolation. It's clear from the video that Marion and James are still just as cheeky as they were back in 2017 and that social isolation hasn't dampened their sparkle one bit.

The Guardian reports that 20% of the planet's population is on lockdown. As swathes of families across the globe find themselves suddenly entirely working from home (parents, guardians, children) never has the Kelly family experience seemed quite as relatable.