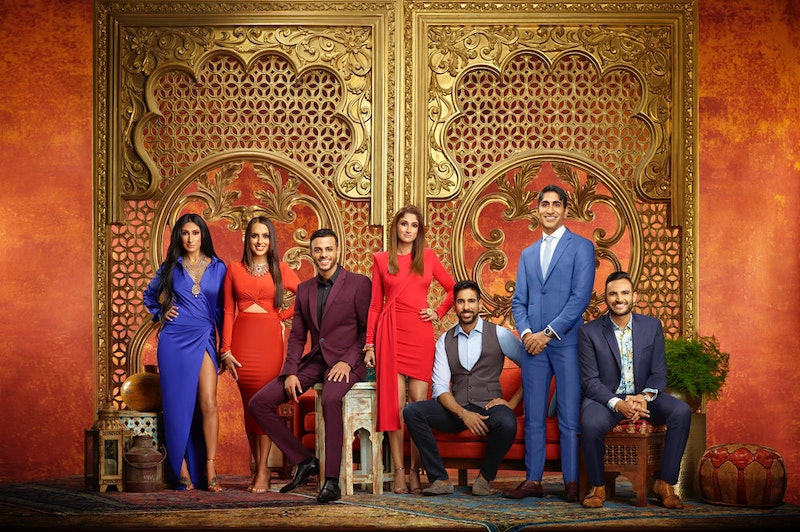 Bravo's newest reality show airing Sundays is Family Karma follows a group of Indian Americans living in Miami. Their families immigrated from India, settled in Florida, and built a strong community there. The children grew up together, and now they make up the cast of Family Karma. Bravo's description of the show teases drama between friends, romantic relationships, and family as some of the younger family members butt up against their parents' and grandparents' more old-school, traditional ways.

But even as they embrace the "American Way" as Bravo puts it, they each have a strong connection to their Indian culture. Perusing the cast's Instagram accounts reveals that much — with members celebrating Indian holidays like Diwali, sporting traditional dress, and more. But their social media accounts also show what makes each of them uniquely their own person as well, forging ahead in a life made possible by their parents coming to this country.

Although parents and family members of the main cast will make appearances throughout the series, Family Karma is mostly focused on the adult friend group made up of seven core members. Get to know them a little better below via what they choose to share on Instagram.

Shaan is in real estate and design construction. Instagram bio says, "My fave things are Miami, Whiskey, & @pooj.01 ... maybe not in that order." Pooja is Shaan's girlfriend, and there are a lot of photos of her on his Insta. There are also lots of posts about Miami life and whiskey. Plus, he uploads photos of his super cute dog Sukhi (who also has its own Instagram account).

Bali's a single mom who's had a hard go of it in the romance department. But now she has a new boyfriend named O'Malley and is hoping things finally work out for the best. Her Instagram bio describes exactly what you'll get on the page: "Deep love for my baby, bubbles, bling, bites, #bollywood and Bombay!" Expect lots of photos of her family (especially her daughter) and pics with her boyfriend.

Anisha's in the fashion business and founded the size-inclusive company Currently. She's also recently single and fully focused on her career. On her Instagram, you'll find lots of posts about yummy food (she used to run a food blog), plenty of fashion inspo, and lots of travel pics.

Monica is a tech specialist who also choreographs Bollywood dance numbers. You'll find a lot of her Bollywood love on Instagram, as well as some pretty killer fashion. Her Bravo bio says that she observes her traditional Indian customs carefully, and is looking for a partner who shares that. She may even find that with fellow cast member Brian, according to her bio.

Brian's Bravo bio calls him the "party boy" who is looking to finally settle down. But will he do so with his longtime friend and crush Monica? His Instagram offers no clues. Instead it shows his family life, partying with friends, and his interest in sports like boxing and snowboarding.

Vishal works for his mom's real estate company and still lives at home. He's been engaged to his fiancée Richa for three years, and everyone's ready for him to finally walk down the aisle. It's clear from his Instagram that he loves Richa — she's all over his page. So is his love for the gym, his friends, adventuring, and his dog Cheeni, who also has an IG account.

Amrit is gay and in a long distance relationship with his Chicago-based boyfriend Nicholas. Amrit's Bravo bio tries to make it seem like there may be drama about whether they can survive the distance, but his Instagram page is filled with photos of Nicholas. So they seem to be doing just fine. Also all over his Instagram are photos of his dog who, of course, has its own Instagram.

Can we get a Family Karma spinoff just about the cast's Insta famous dogs?

More like this
The Bachelor’s Christina Mandrell Comes From One Of Country Music’s Most Famous Families
By Brad Witter
'Bling Empire: New York’ Star Tina Leung Has A Superhero Alter-Ego
By Alyssa Lapid
Susie Wrote About Choosing "Sun Not Shade" After Clayton & Rachel's 'Bachelor' TikTok
By Grace Wehniainen
Erika Jayne's Estranged Husband Tom Girardi Has Been Indicted On Fraud Charges
By Jake Viswanath
Get Even More From Bustle — Sign Up For The Newsletter
From hair trends to relationship advice, our daily newsletter has everything you need to sound like a person who’s on TikTok, even if you aren’t.