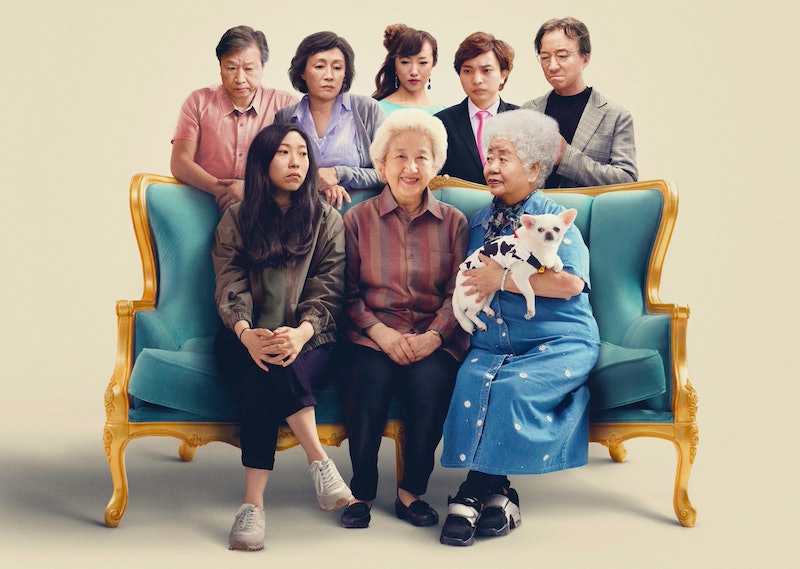 Awkwafina is known for playing loud and raunchy comedic characters, but her new film gives the actor more dramatic material to sink her teeth into. The Farewell sees Awkwafina as a woman who visits her dying grandmother in China after learning that she is unaware of her terminal cancer diagnosis on account of her family keeping it a secret. In the movie, this type of secrecy is said to be a common aspect of Chinese culture, but is it really? Is The Farewell based on a true story?

It is. The film — which sports the tagline "based on an actual lie" — is written and directed by Lulu Wang, who based it on her own experience with her family, with Awkwafina portraying a character based on Wang. The writer/director first shared the story to a large audience in a 2016 episode of NPR's This American Life titled "What You Don't Know," which served as the basis for the film. In the episode, Wang states that it is customary for doctors in China to share bad news with family members rather than patients; particularly if the patient is very old. In the case of Wang's grandmother — whom she calls Nai Nai — she was 80 years old when diagnosed with stage four lung cancer. The diagnosis was given not to her, but to her younger sister, whom the doctor encouraged to hospitalize Nai Nai for treatment. But Nai Nai's sister made the decision to keep the diagnosis from her sibling in the belief that keeping Nai Nai out of the hospital would both prolong her life and improve her quality of life since she wouldn't be stressed over her illness and impending demise.

For the truest account of what happened with Wang's grandmother, your best bet would be to listen to the NPR episode because even though The Farewell has a lot of truth in it, it's still a movie based on a true story. In other words, not everything in the film was pulled from real life. "In adapting this story for the screen, I had to untangle myself from the facts and straddle the line between reality and fiction in order to make the most truthful film," Wang told Filmmaker Magazine. "The challenge was in deciding where I could take creative license while still maintaining verisimilitude."

Still, The Farewell is more "real" than most movies based on true stories — even down to its casting and locations. Filming was done at the actual graveyard where Wang's grandfather is buried, and at the actual venue where her cousin's wedding took place. But the film's biggest example of art imitating life comes in the form of the woman who portrays the sister of Wang's grandmother, "Little Nai Nai," because Wang convinced the actual Little Nai Nai to play herself.

"There are several family members I initially considered casting to play themselves, including my parents, but my great-aunt, whose family nomenclature I’ve roughly translated to "Little Nai Nai," was the one I felt most certain about. She played a vital role in the real-life deceit, but more importantly, she embodies the immediacy of joy and pathos at the heart of this story," Wang told Filmmaker Magazine. "The producers and I had a new concern regarding the ethics of asking Little Nai Nai to revisit such a traumatic experience for the sake of our movie. However, she insisted that it was good therapy for her and, after a lengthy discussion with my family, we cast her."

Awkwafina shows off some previously unseen dramatic chops in The Farewell as she channels the real life grief of her director on the film, Lulu Wang. And although the idea of a filmmaker directing an actor to play herself may seem odd, it apparently worked in this case, as the reviews for The Farewell have been beyond stellar.