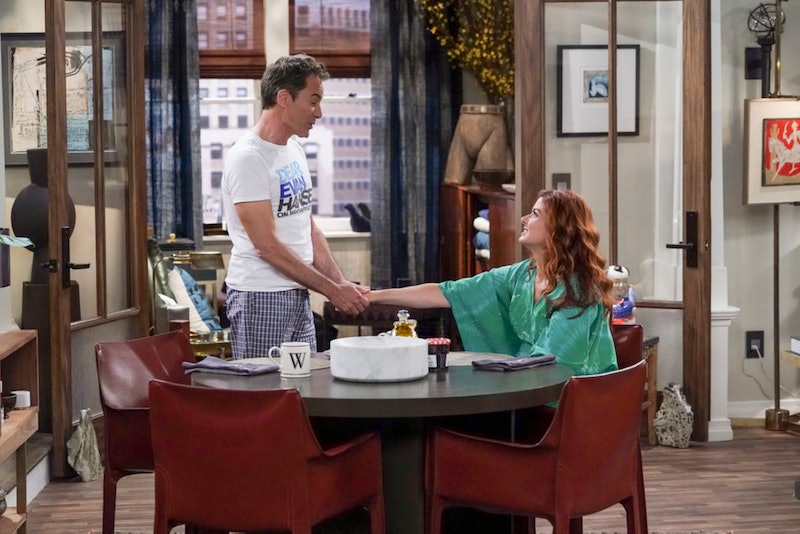 Spoilers ahead for the Season 3 premiere of Will & Grace. Will & Grace Season 3 begins with Grace regaling Will with tales of her travels in Europe — a trip she describes as "freeing" and filled with "good, dirty," meaningless sex. Minutes later, she's bawling to a stranger on the subway because she's just found out she's pregnant. For Grace, it's quite the role-reversal: she only just began exploring the possibility of living life for herself and only herself, and now she's faced with the prospect of living it entirely for someone else.

Within the episode, Grace doesn't make much mention about who the father might be. Could it be Marcus, the man she met at the airport then flew with to Milan? The construction worker she fooled around with "in the scoop of a bulldozer"? Or even Noah, who sort of sparked this whole adventure after Grace realized he wasn't putting enough into their relationship? Maybe, maybe not. It sort of depends on the timeline, and it's not clear how long Grace has been pregnant. But ultimately, the dad doesn't seem to be of much importance to her; after recovering from the shock of the news, she's just excited about being a mother.

What would make the most sense is if she and Will decided to raise the baby together. Will & Grace has always been about their friendship, and in its final season (well, the second final season, since it's the reboot), watching them navigate another life milestone together would be the perfect sendoff — and exactly what the show seems to be angling toward.

In the Oct. 24 episode, we also learn that, as fate would have it, Will and his long-distance boyfriend McCoy have decided that they want to have a baby together, too. Will doesn't offer the idea of them raising Grace's baby — he simply says he wants their kids to be "best friends" — but it's not unprecedented. McCoy is working in London while Will is still in New York, which makes the logistics tricky. Plus, they're in a relatively new relationship, so who really knows how long they'll last. And perhaps most importantly, Will and Grace already had this plan: in Season 4 of the original series, they decided to have a baby together. The next season, Grace started to date Leo behind Will's back, canceling their plans and putting a major wedge in their friendship. But perhaps they'll revisit the idea now that they're in a stronger, healthier place.

Whatever the case ends up being, Will will definitely be by Grace's side the whole way — just as he has for the entire show.